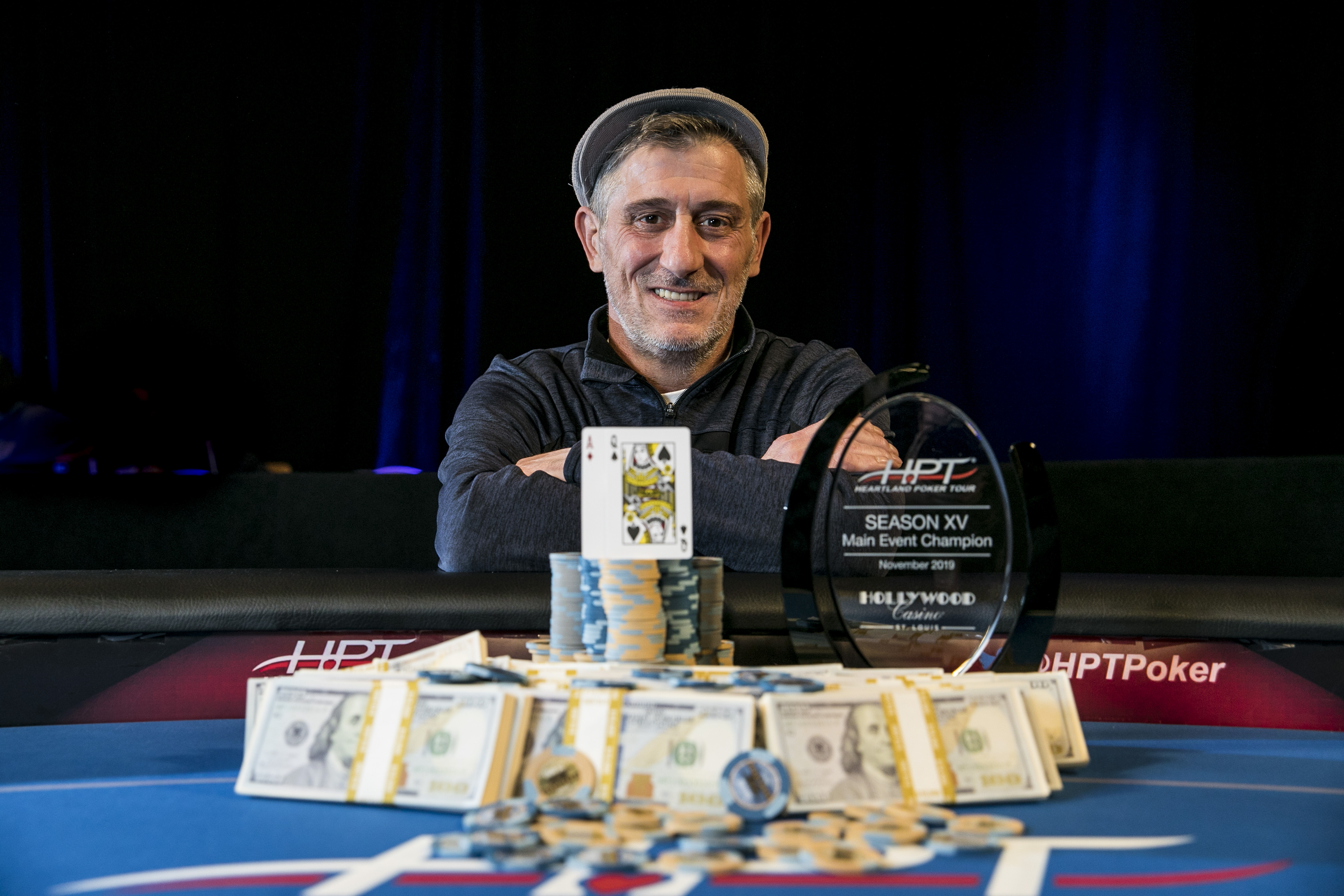 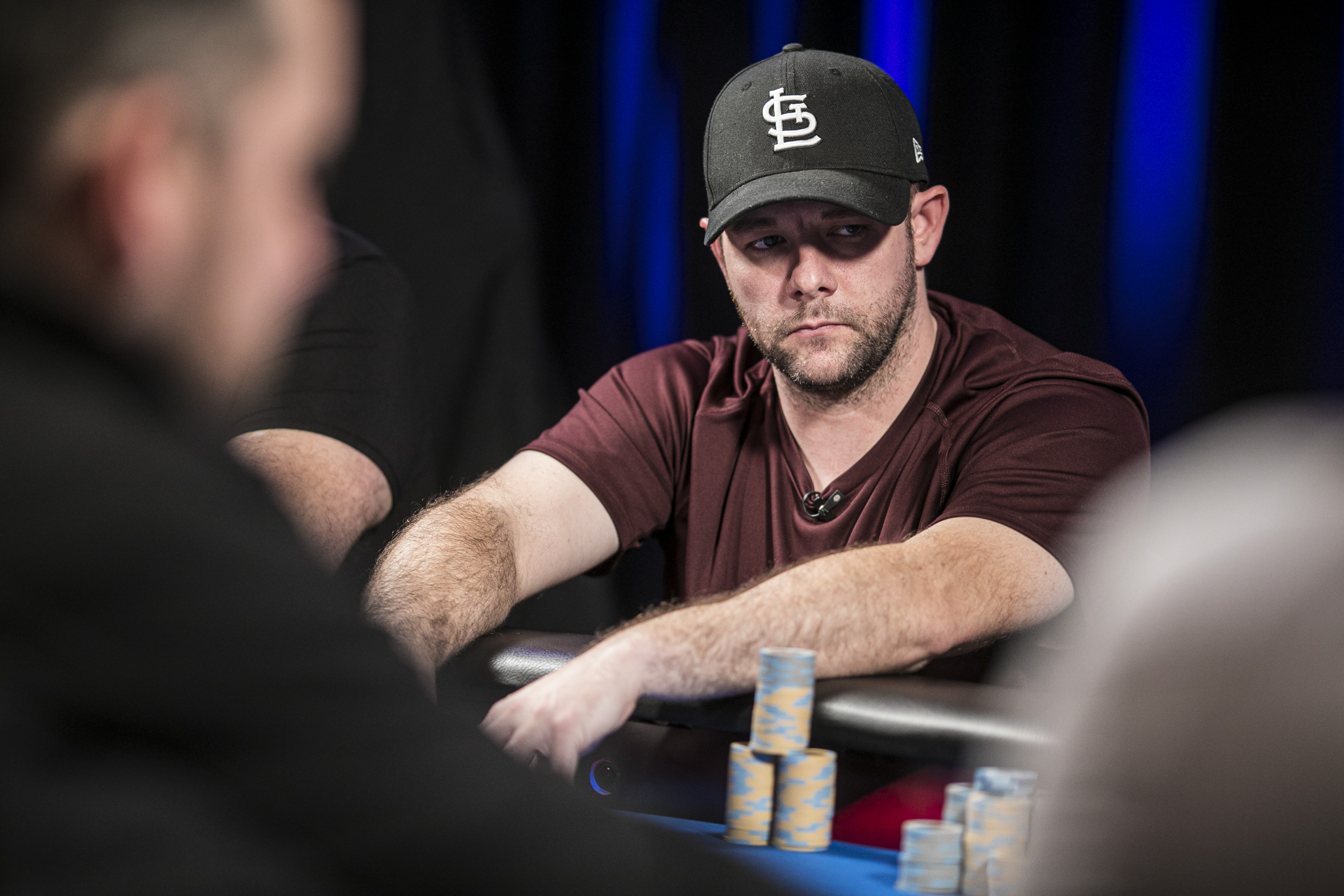 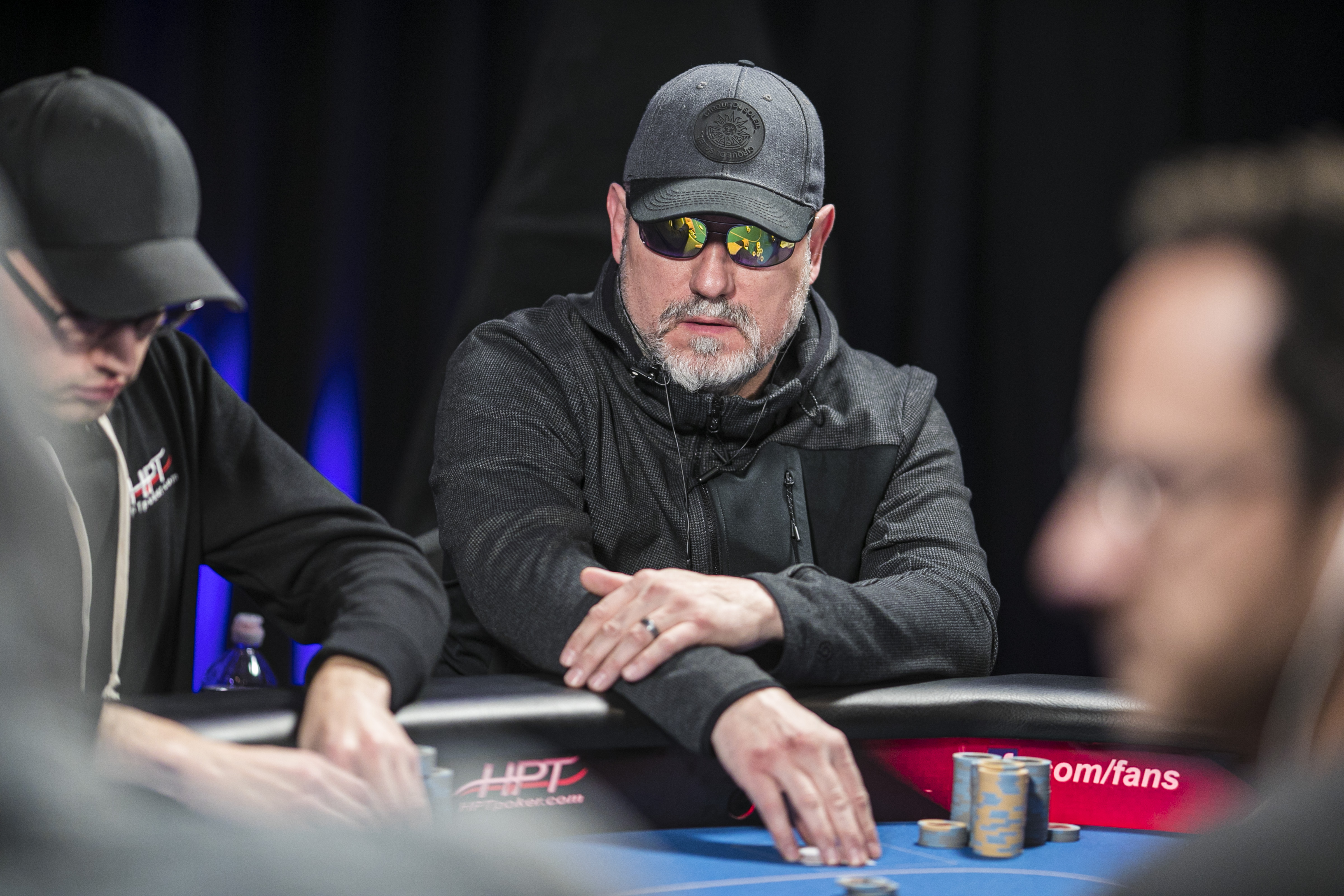 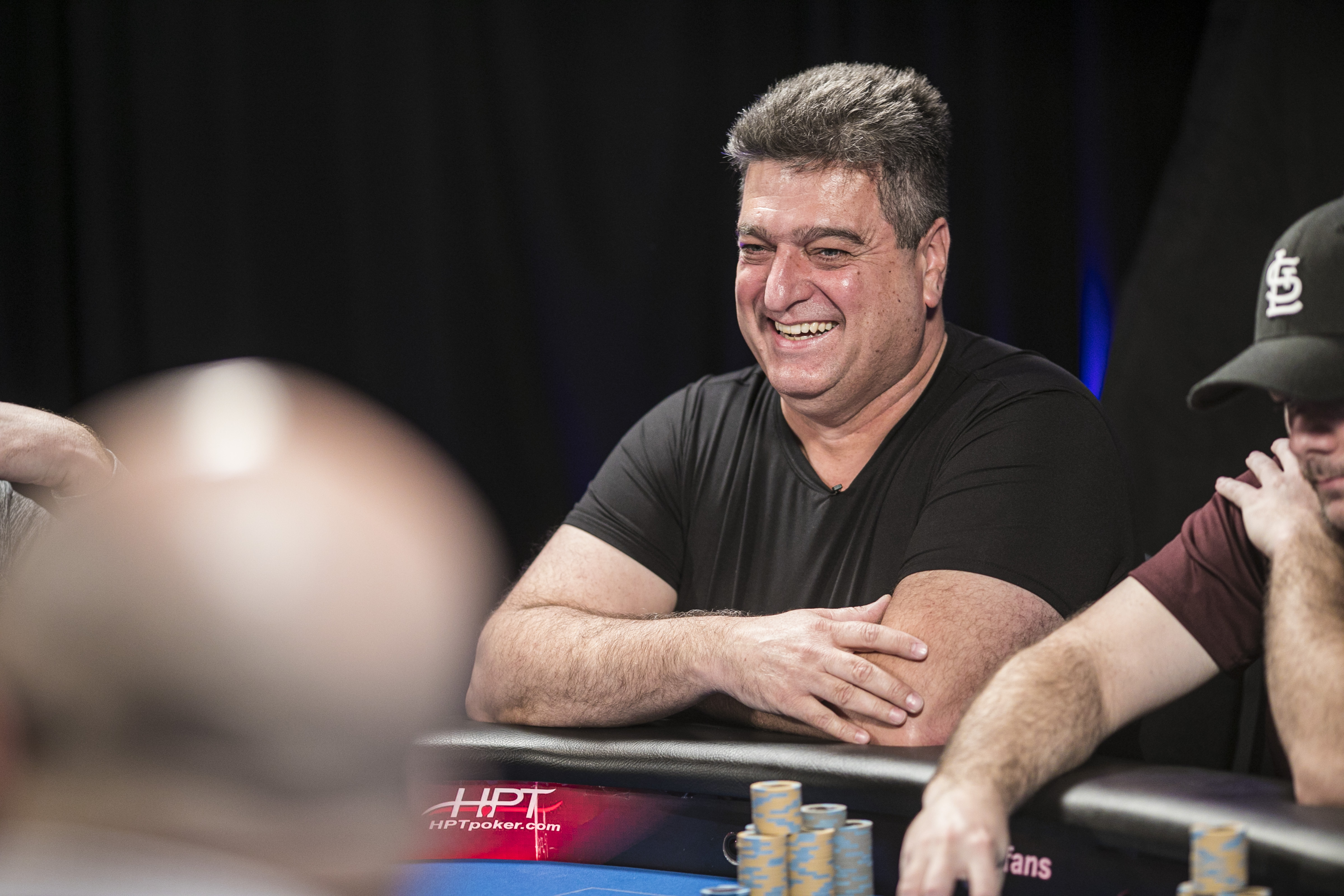 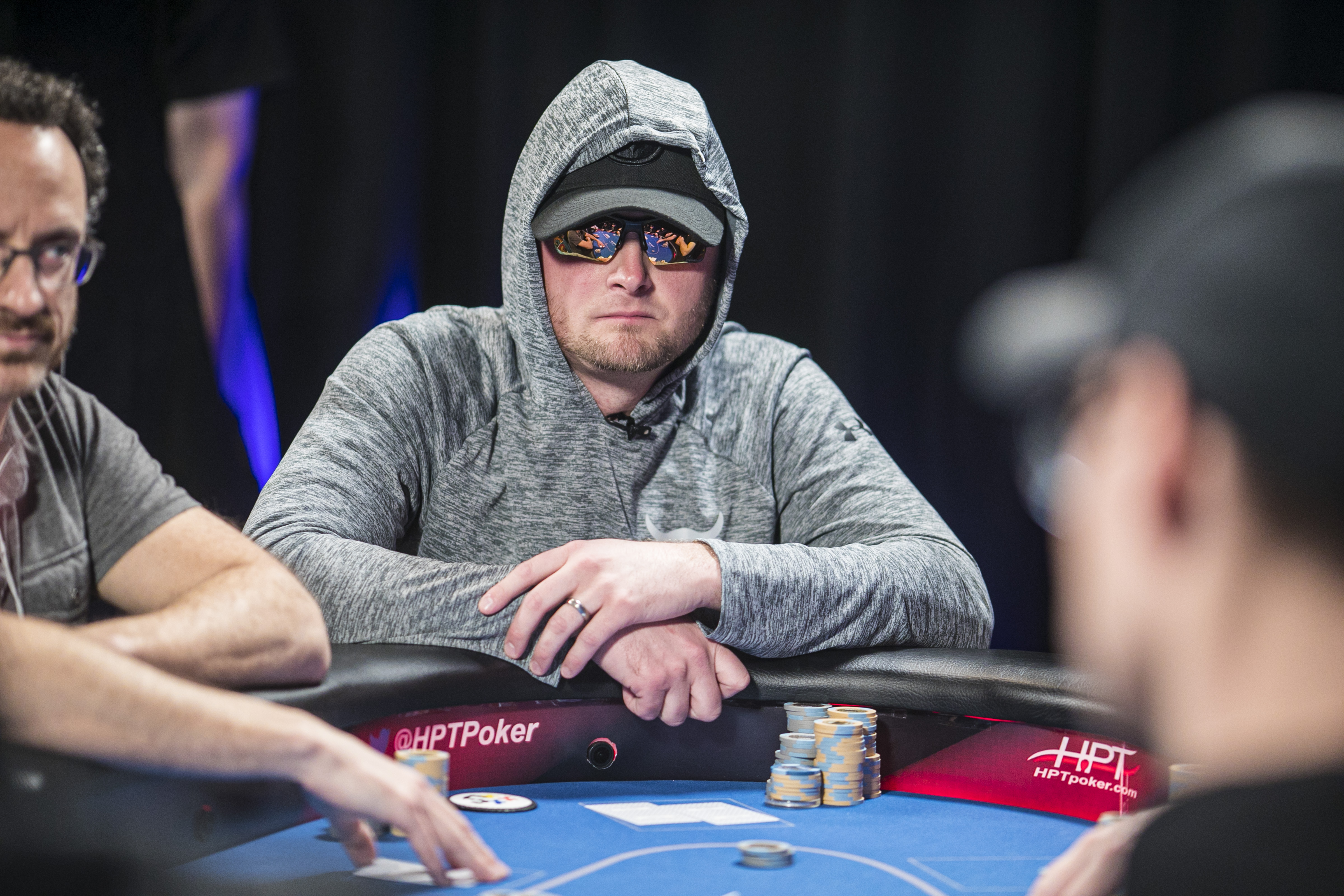 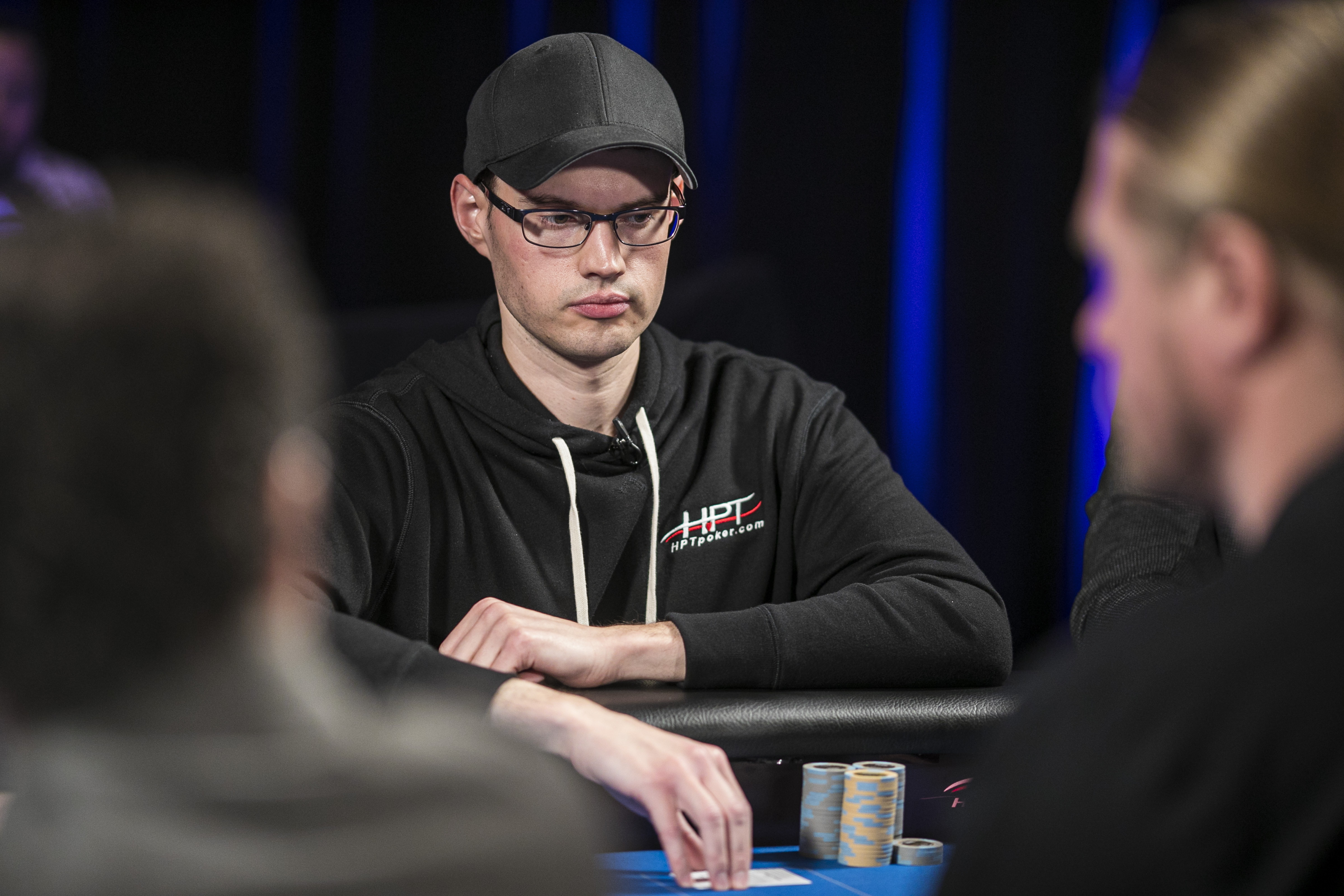 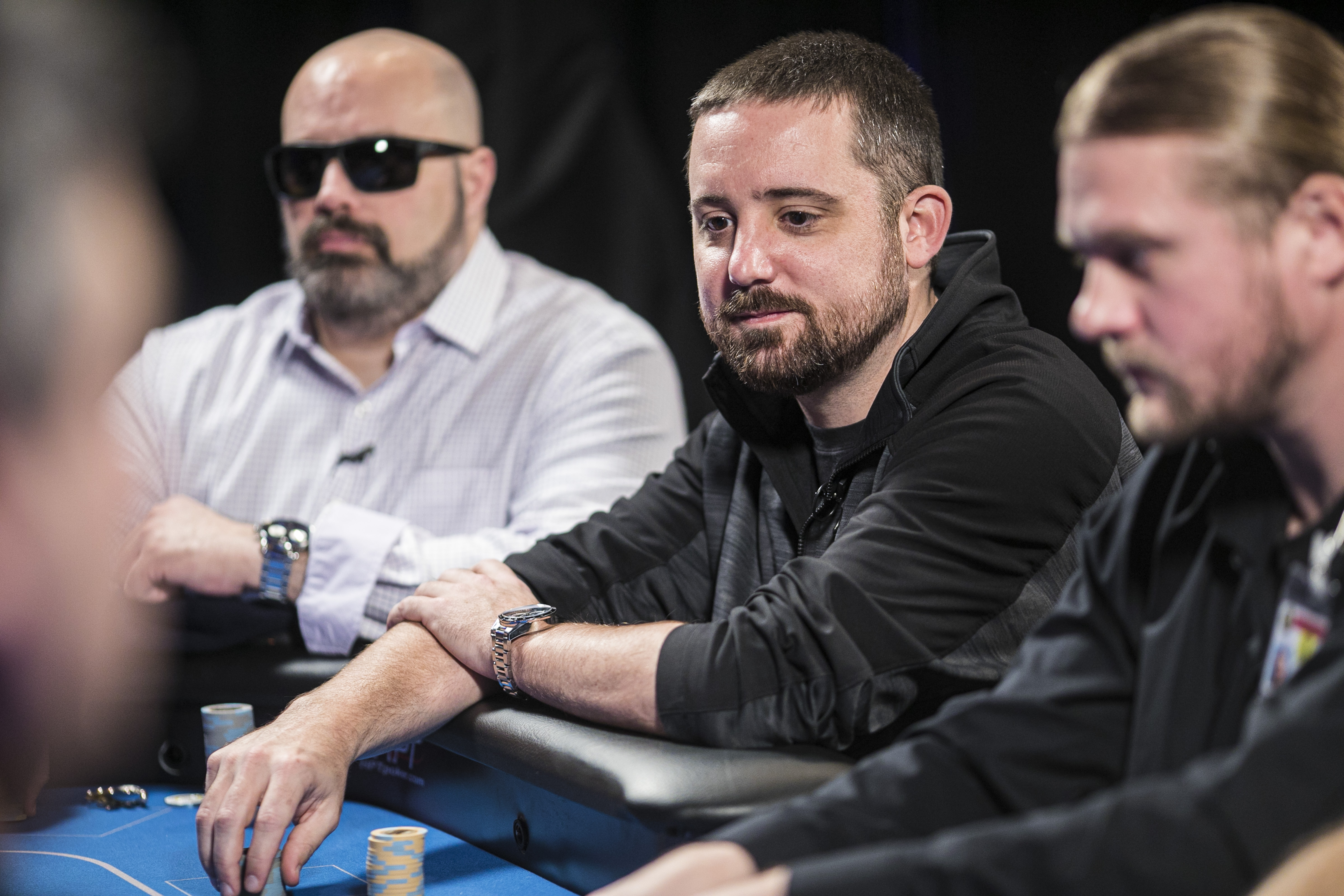 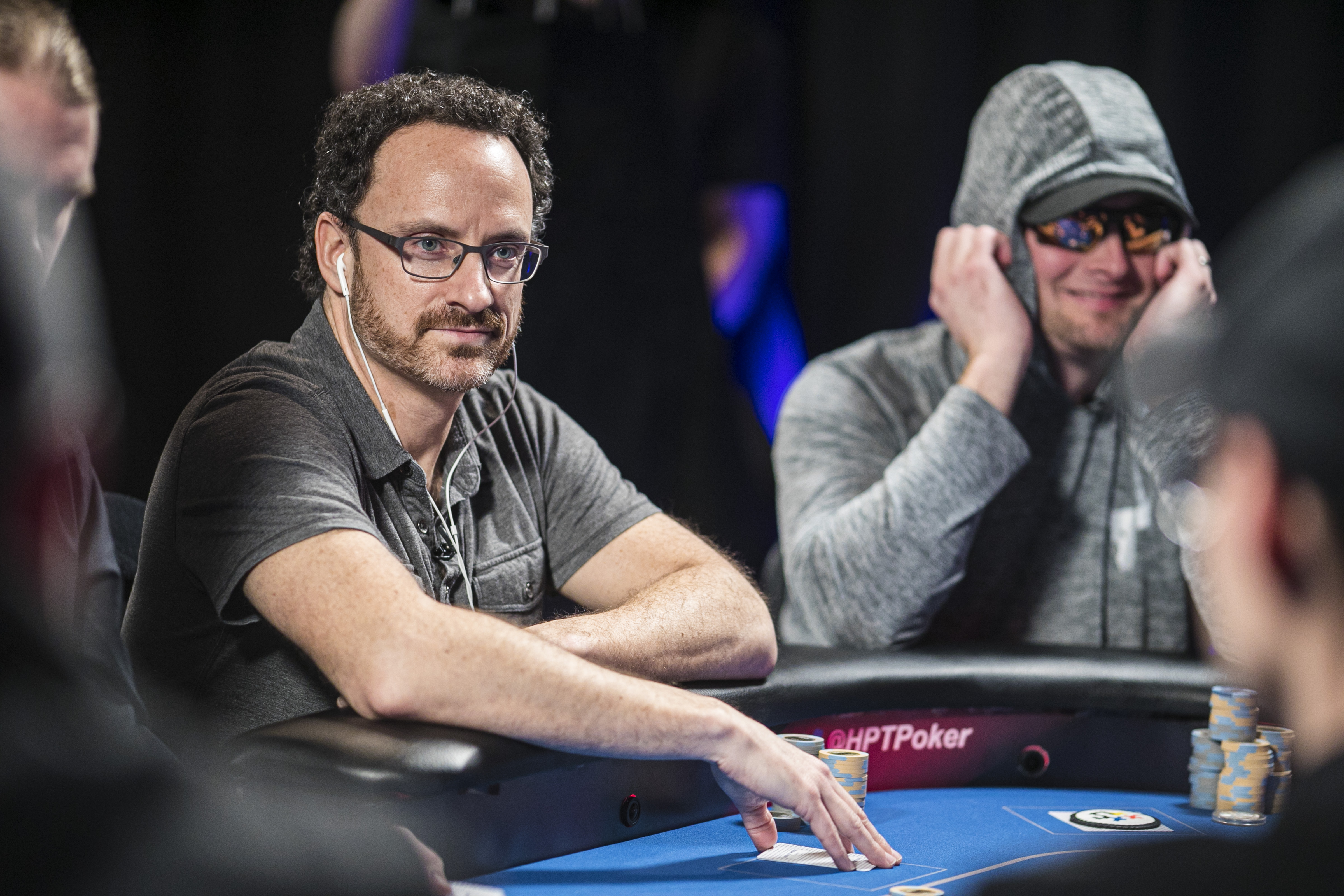 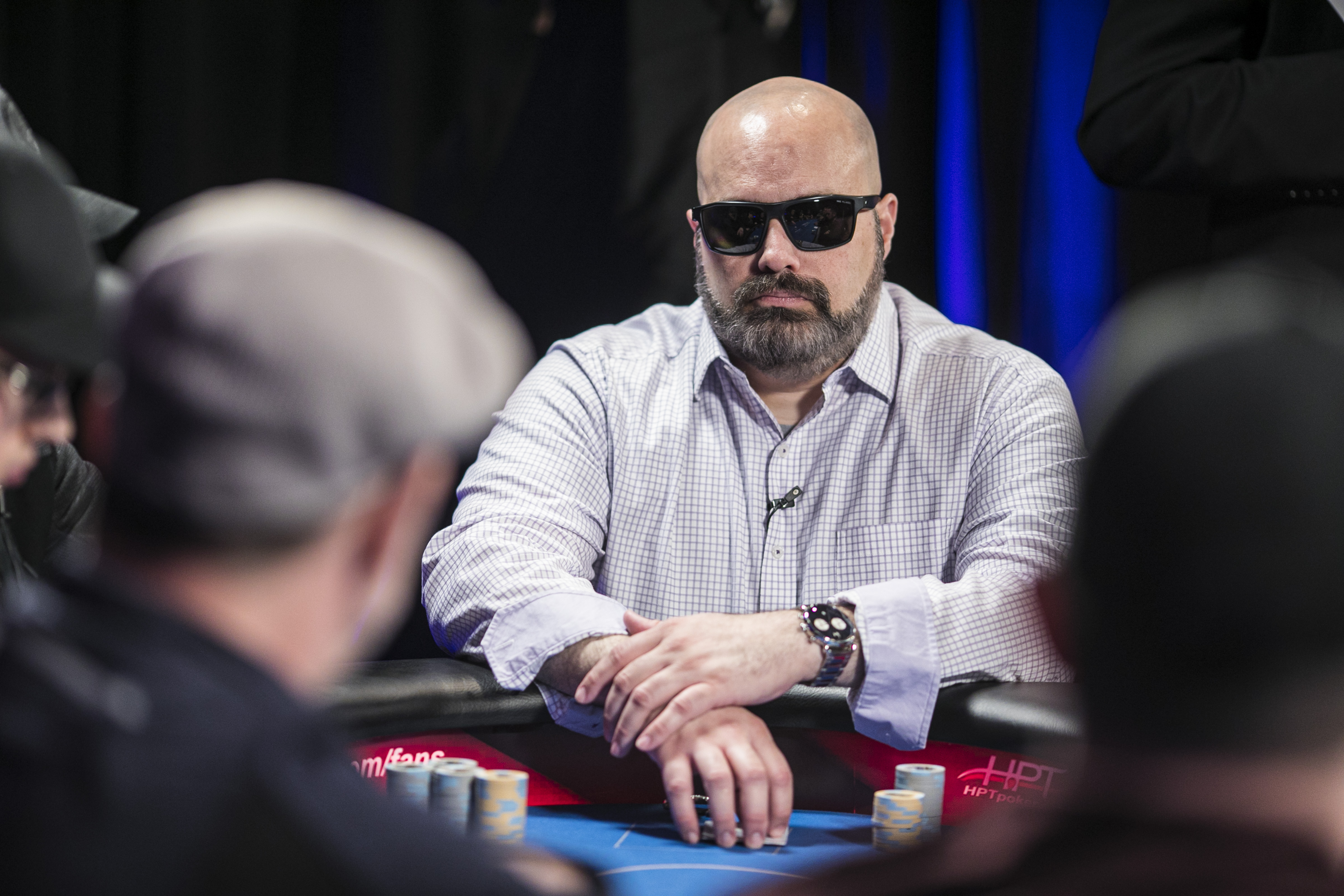 by Brandon Temple of PokerNews

Season XV of the Heartland Poker Tour came to a close at the Hollywood Casino St. Louis, as Paul "Walnuts" Bianchi topped a 353 player field to win the HPT $2,500 Championship Event and $181,874 in prize money.

"Feels great. Long time comin'." Bianchi, a Chicago native who runs a cafe, told HPT Tournament Director Jeremy Smith after his victory. Bianchi has over $300,000 in lifetime tournament earnings prior to today's victory, including a victory in last season's $500 Seniors Championship at the Season XIV finale. In fact, that prior victory was the whole reason Bianchi was in town for the weekend.

"That's what got me out here! I played the seniors, busted, I satellite in this, sailed through it." Bianchi's run through the main didn't go quite as smoothly as the satellite, however, as he was short-stacked for much of Day 2 play, starting the day with 41,600 in chips and hovering near the bottom of the counts all day long. "41,000 and went on for about six hours. Yesterday was a grind, a rough day. When you're short-stacked, you just play it like you see it. It was a long day."

Paul Bianchi infamously spun a $1,200 investment at the blackjack tables into a WSOP Main Event cash in 2014, but his plans for this windfall were much more reserved. "I'm gonna rest for a while, take some time off and do my thing. Relax."

With ten players returning and nine seats waiting for players at the nationally-televised final table, one player would have to bust before action would move to the main stage. Kevin Hopkins was the unfortunate bubble boy for the official final table when he ran his suited ace-seven into the aces of Paul Bianchi, setting the stage for the final table.

James Burns was unable to spin up his short stack, falling shortly after the final table commenced when his ace-queen ran into the ace-king of John Michalak. Two levels later, Canada's Bradley Smith lost a flip with pocket deuces to Hamid Izadi and his ace-seven to take eighth-place.

After Jason Darland busted a short time later in seventh, reigning HPT Season XIV Player of the Year Aaron Johnson got his last ten big blinds in preflop with king-nine, and ran into Michalak and his ace-king of clubs. Johnson, who finished sixth at the final table of the HPT Season XIV Championship, matched his run in this year's iteration of the event when he failed to find a nine.

Justin Coliny held the chip lead after Johnson's elimination, but two hands would spell the end of Coliny. First, Coliny attempted a big bluff against Bianchi, but Bianchi held trips and made the call to take half of Coliny's stack. A few hands later, Coliny made a flush on a double-paired board and committed his last twenty big blinds on the river, but Michalak held aces-full, leaving Coliny, who made his way into this tournament via satellite, walking out with a $40,327 payday for his efforts this weekend.

The start of the day chip leader, Hamid Izadi, sent a chunk of his stack over to Bianchi after Izadi paid off a big river bet from Bianchi. A few hands later, Izadi went for a bluff with eight-five on a jack-ace-eight-jack board, but Christopher Audrain made a call for his last fifteen blinds with ace-nine and left Izadi with just one-and-a-half big blinds, which he lost the next hand. The affable poker pro from Georgia earned $53,769 for his second HPT final table of the season.

The chip stacks between the final three players saw Michalak holding a slight lead over Bianchi, and Audrain was the short stack, but still held 35 big blinds to work with. The trio traded the chip lead back and forth between each other for a few hours, no one able to stretch a huge lead over the other two players. Finally in Level 29 (50,000/100,000/100,000), Audrain got his last 2.3 million in on a ten-high flop, and Michalak called with a combo draw and an overcard. Audrain's pair held, and Michalak went down to under twenty big blinds.

Michalak was able to hang on for a bit longer, before he three-bet shoved over a Bianchi button open with ace-nine. Bianchi had the goods with a pair of queens, however, and Michalak's fourth HPT final table run ended in third place, the Cleveland, Ohio native's best finish so far on tour.

Bianchi started heads-up play with a 2:1 chip lead over Audrain, and the duo's boisterous rails seemed primed for a lengthy battle. Just twenty minutes into Level 30 (60,000/120,000/120,000), Audrain's ace-nine of spades was bested by the ace-queen of Bianchi, but Audrain found two spades on the flop to give him eleven outs to continue the battle, as Bianchi held the queen of spades. The turn and river were both black, but neither were a spade, and Audrain had to settle for $115,129 as a consolation prize.

"Well, he flopped a monster," Bianchi said of his heads-up opponent. "I had one of his spades, he's got nines, he's got spades. But it didn't come, I faded it. I've been there before, he had a good run."

That does it for PokerNews's coverage of the HPT Season XV Championship. Congratulations to Paul Bianchi for the biggest win of his tournament career!

With 20 poker tables (50 tables during HPT), the non-smoking Poker Room at Hollywood St. Louis is the largest in the market. Other features/promos include free wifi, USB ports on the tables, a cashier and self service soda/coffee station, and $15 food vouchers for 4 hours of live play, up to 2 per day. Hungry while playing? Ask your dealer about Buffet To Go! For more information on the poker room, call 314-770-7600 or click HERE.

Click HERE to make your reservation before it's too late! Or call 314-770-8100 and tell the reservationist you're coming in to play HPT.