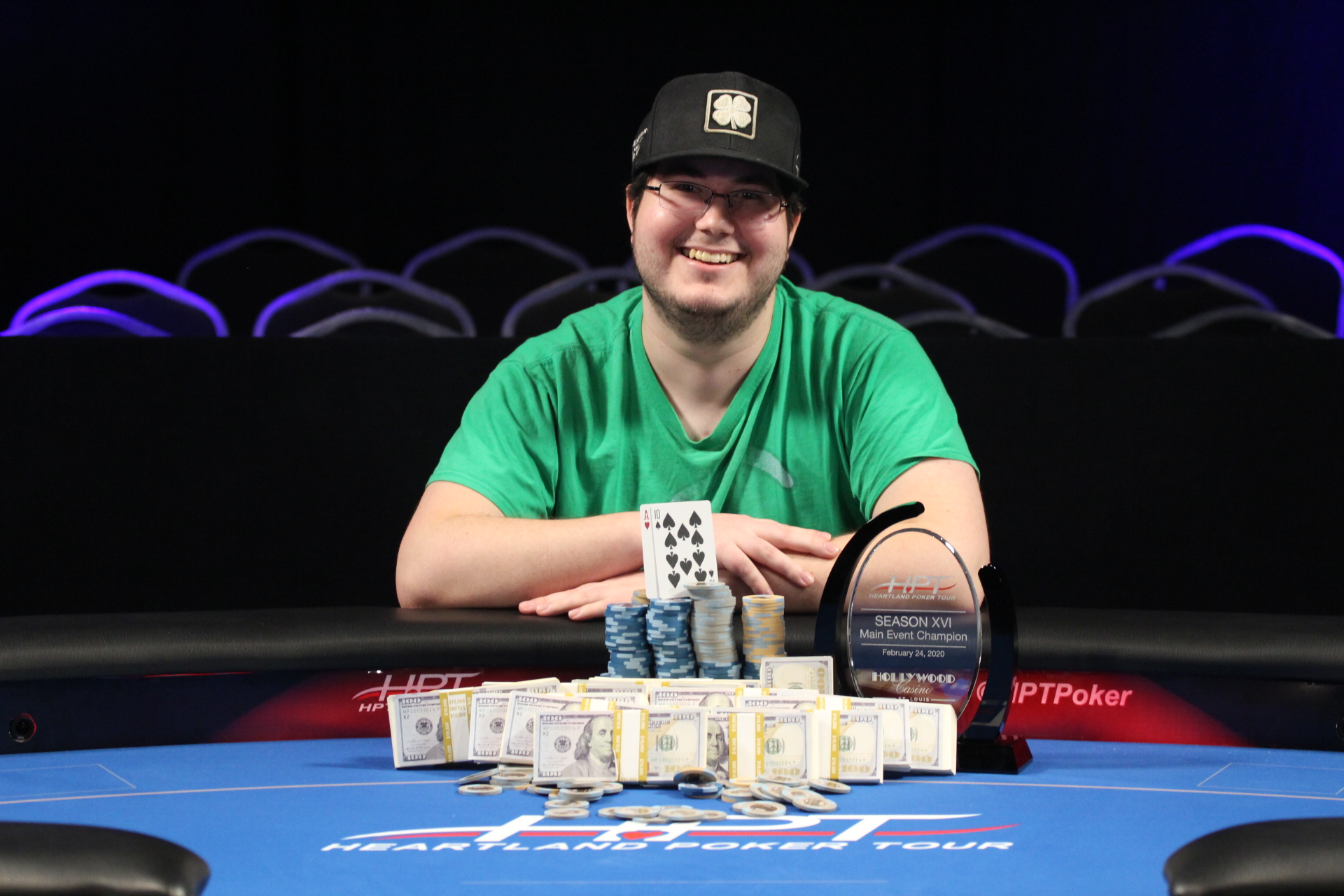 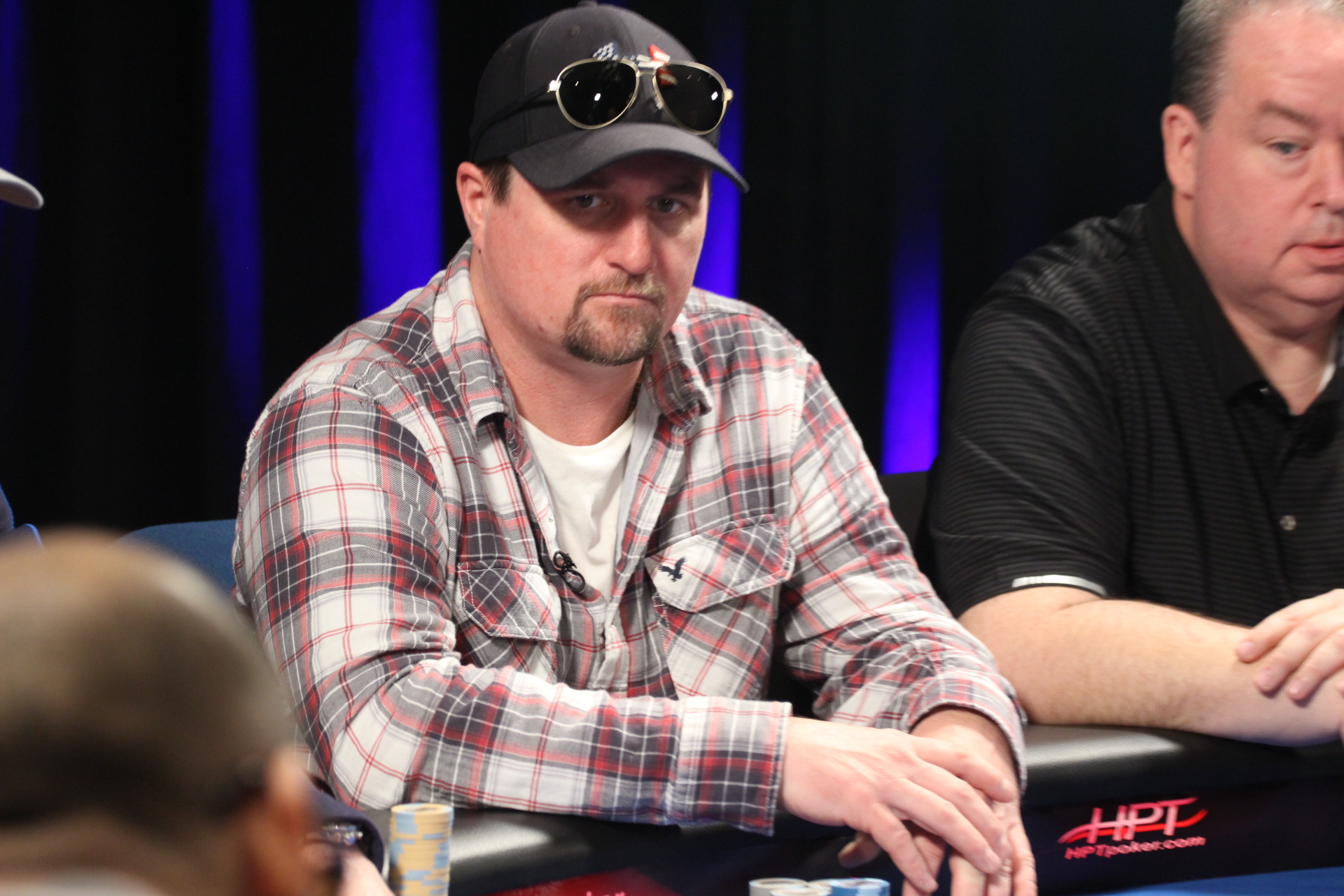 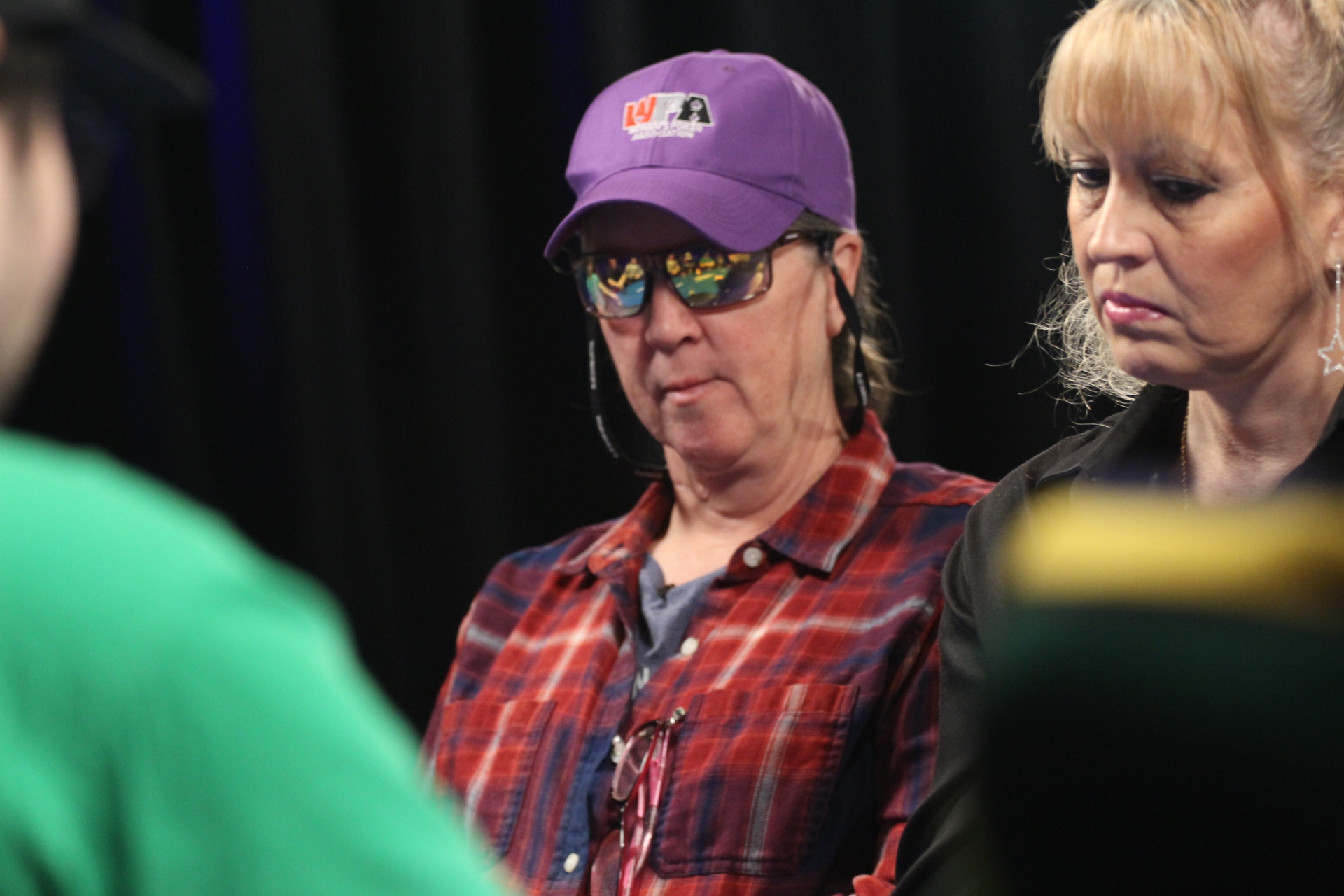 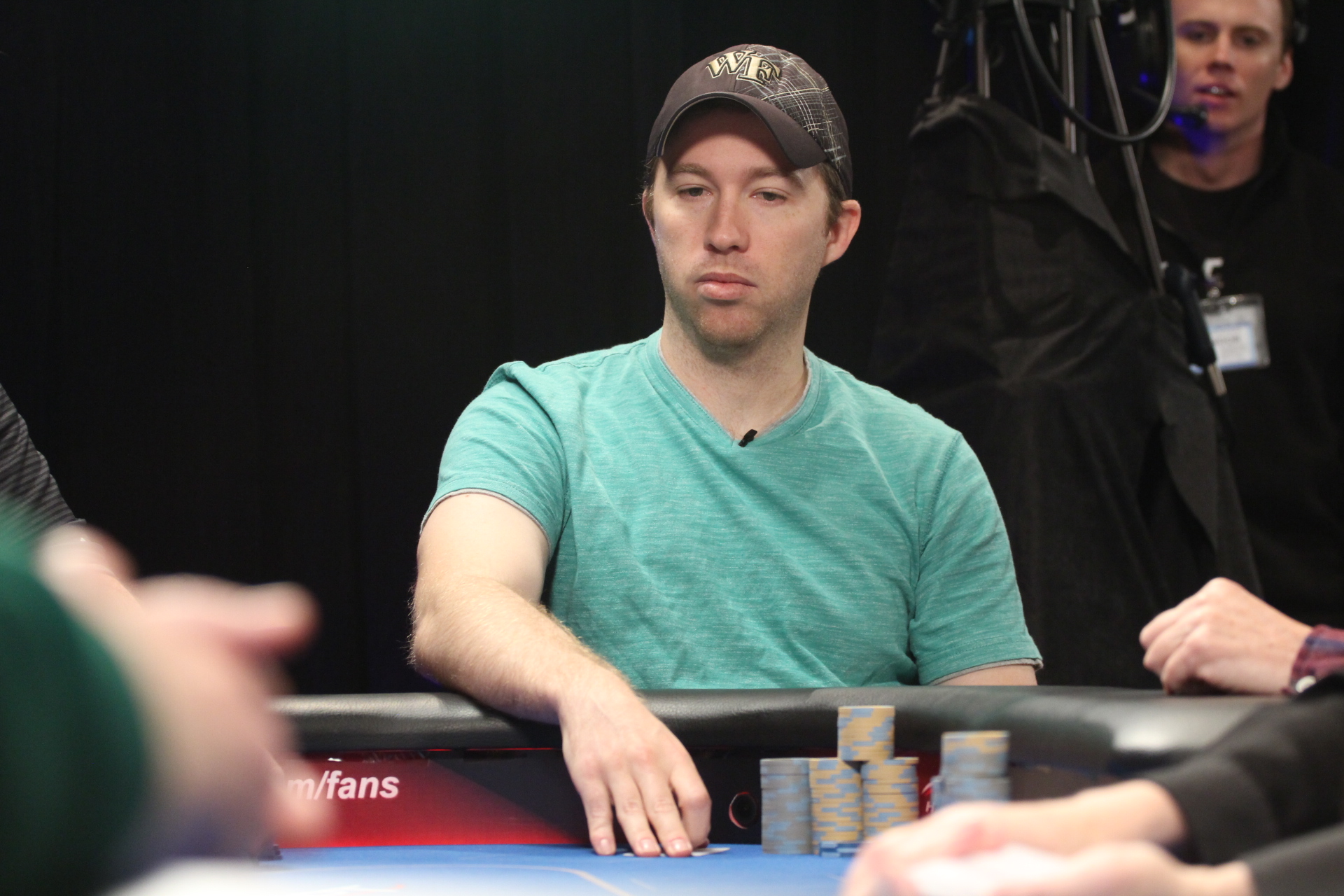 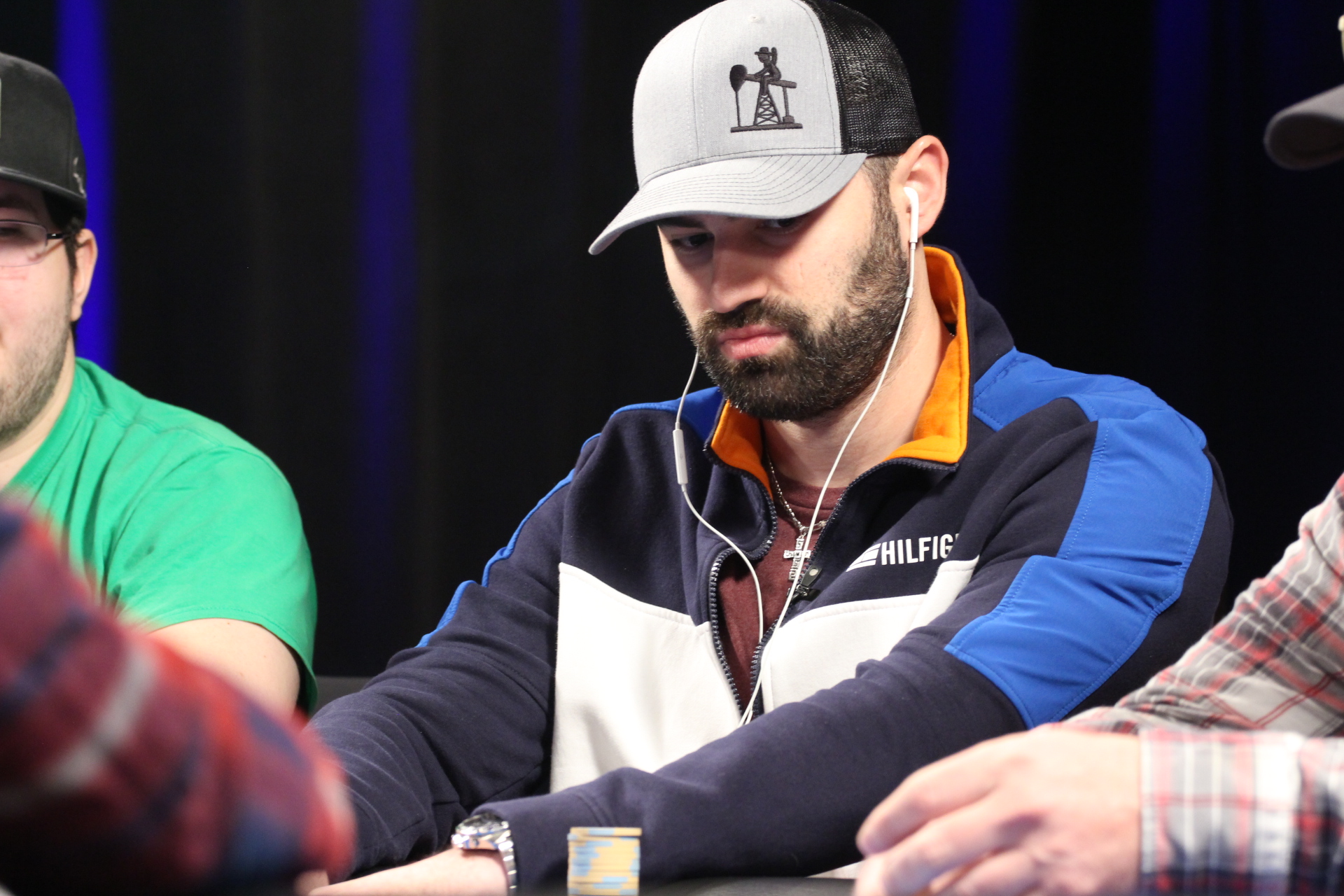 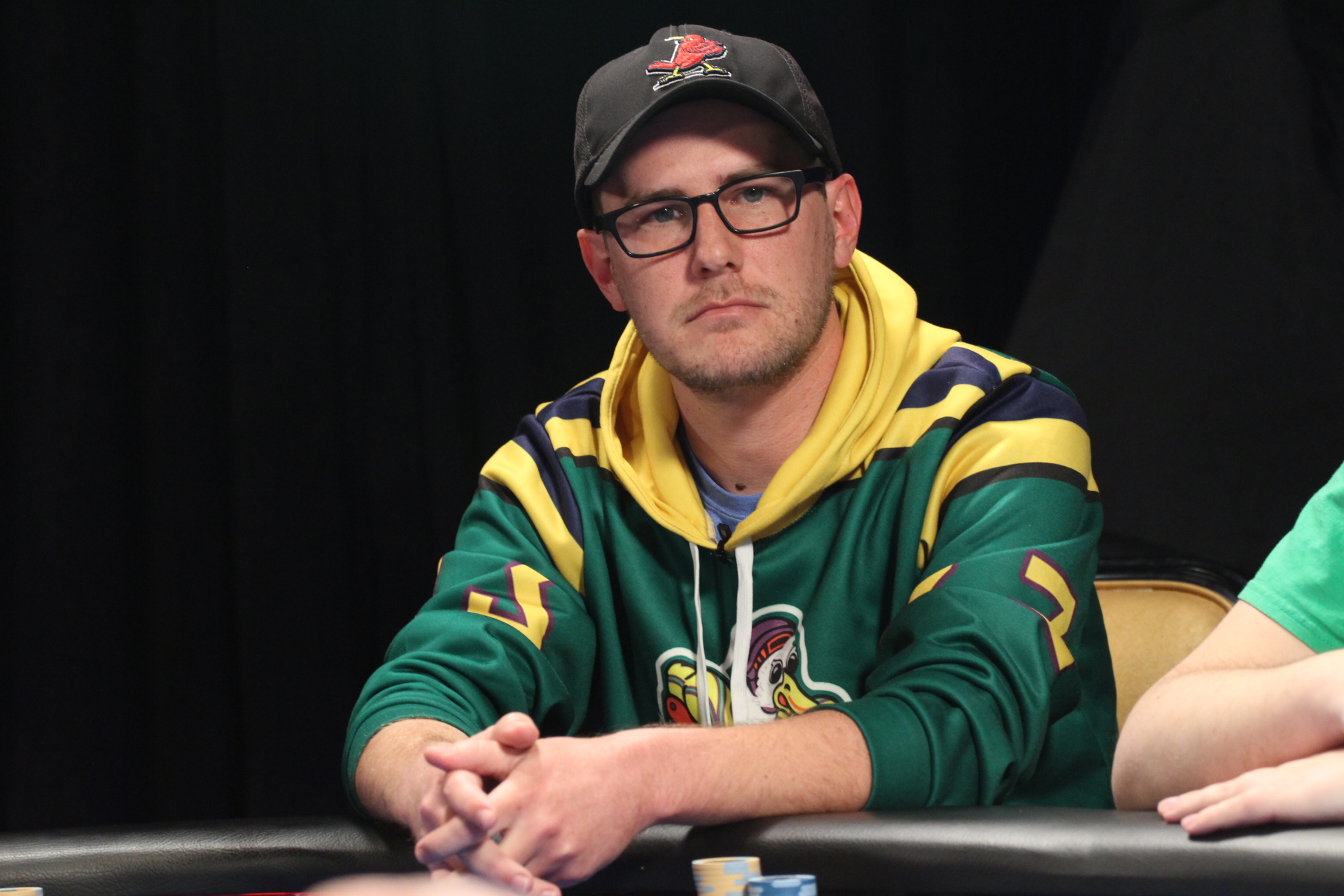 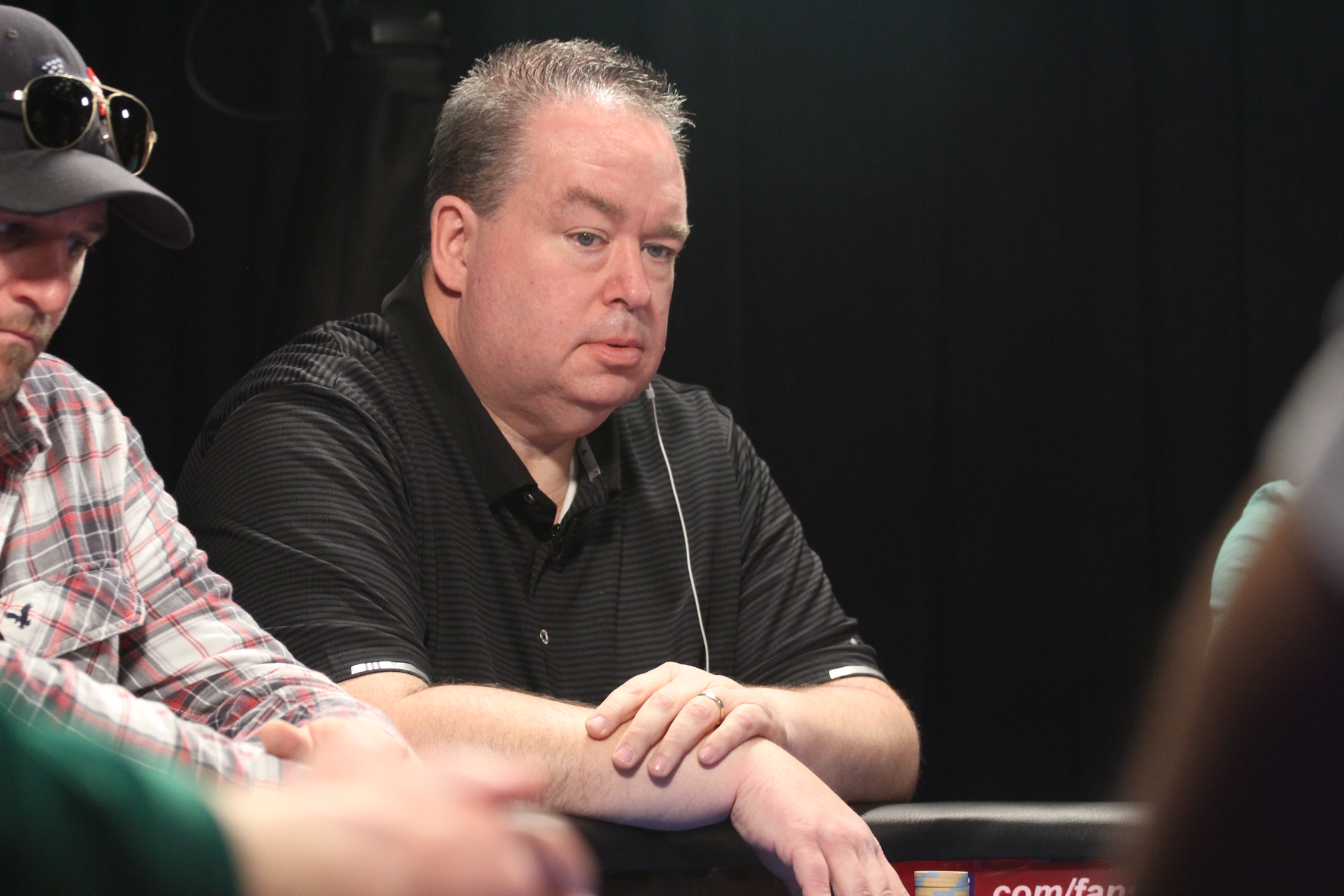 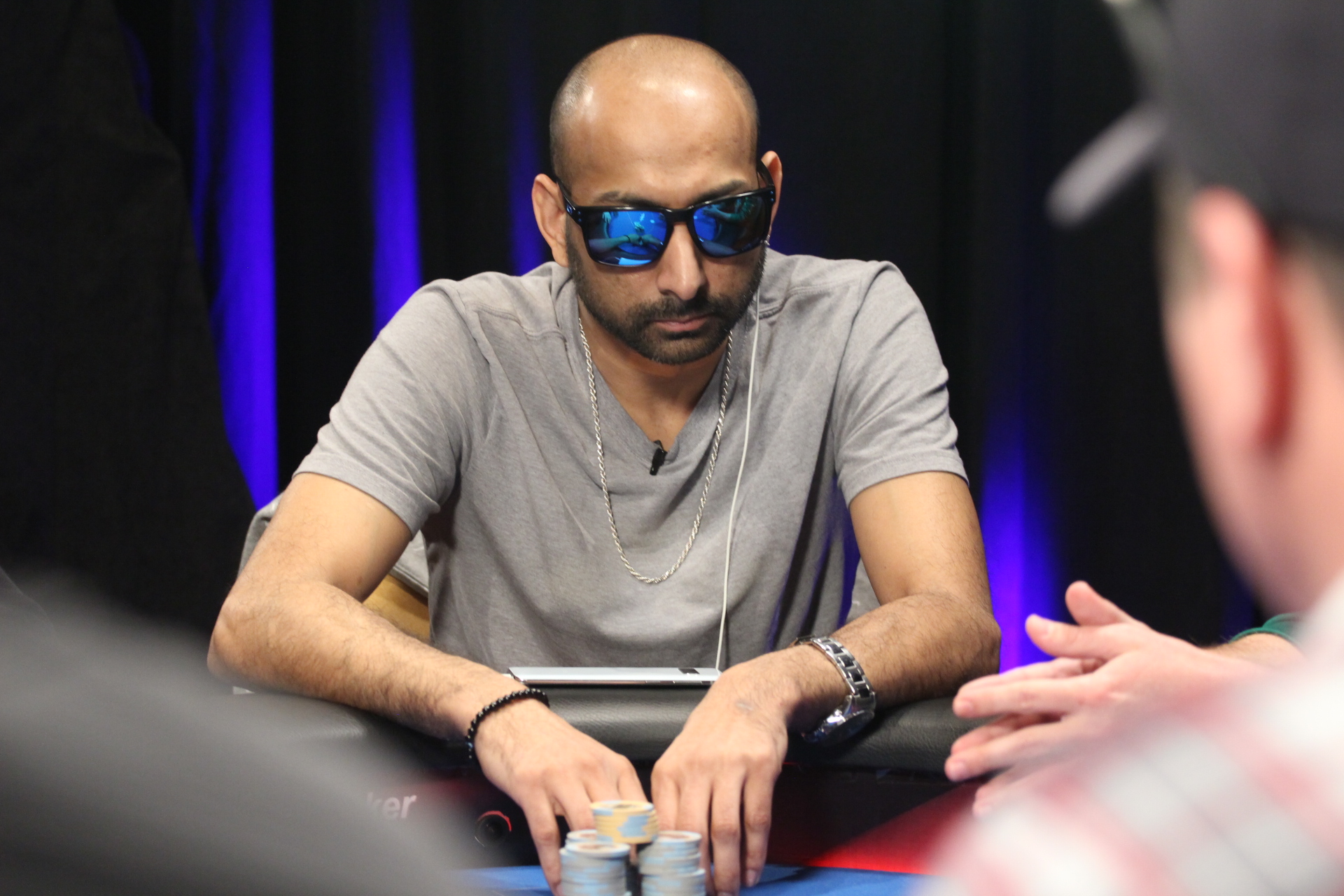 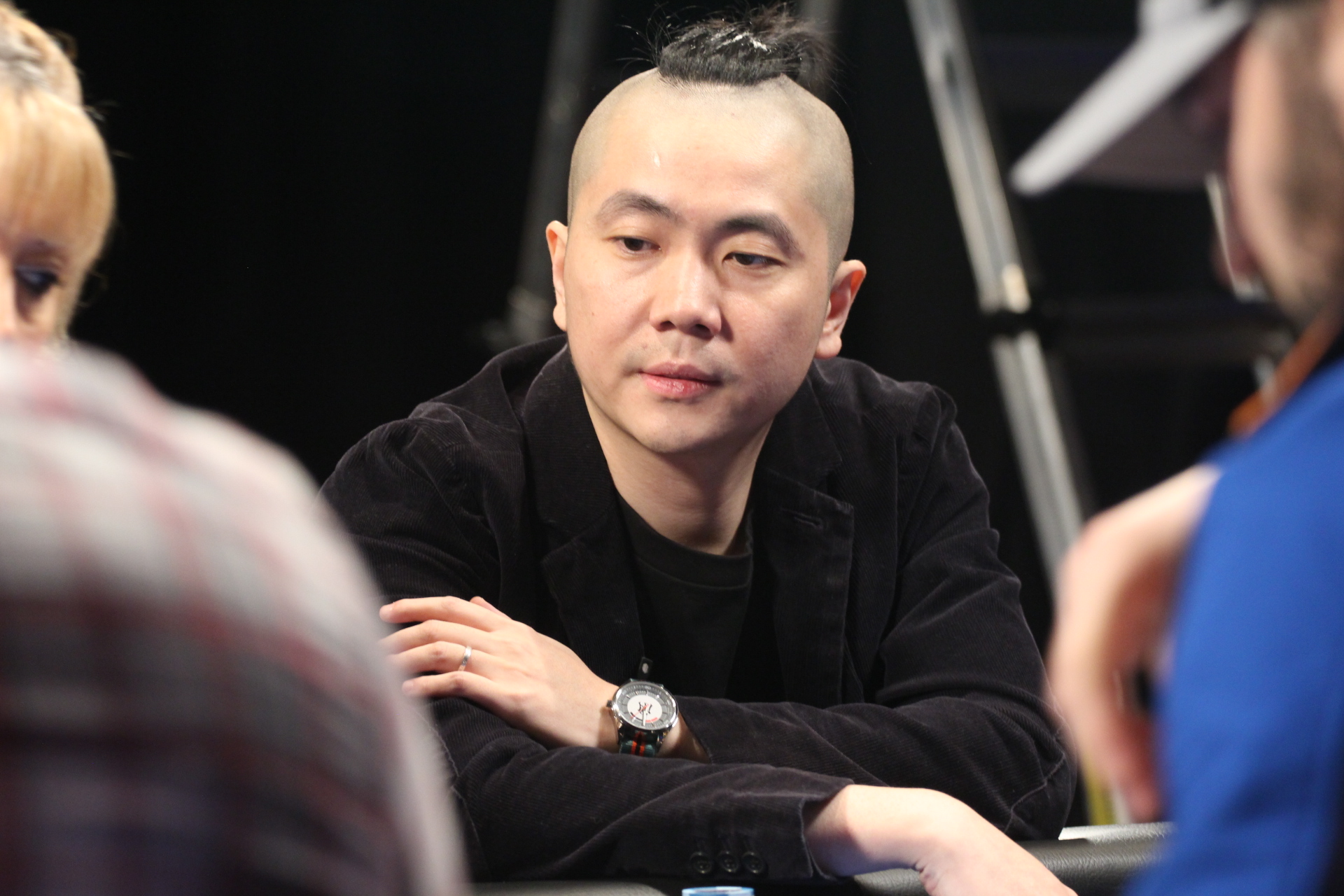 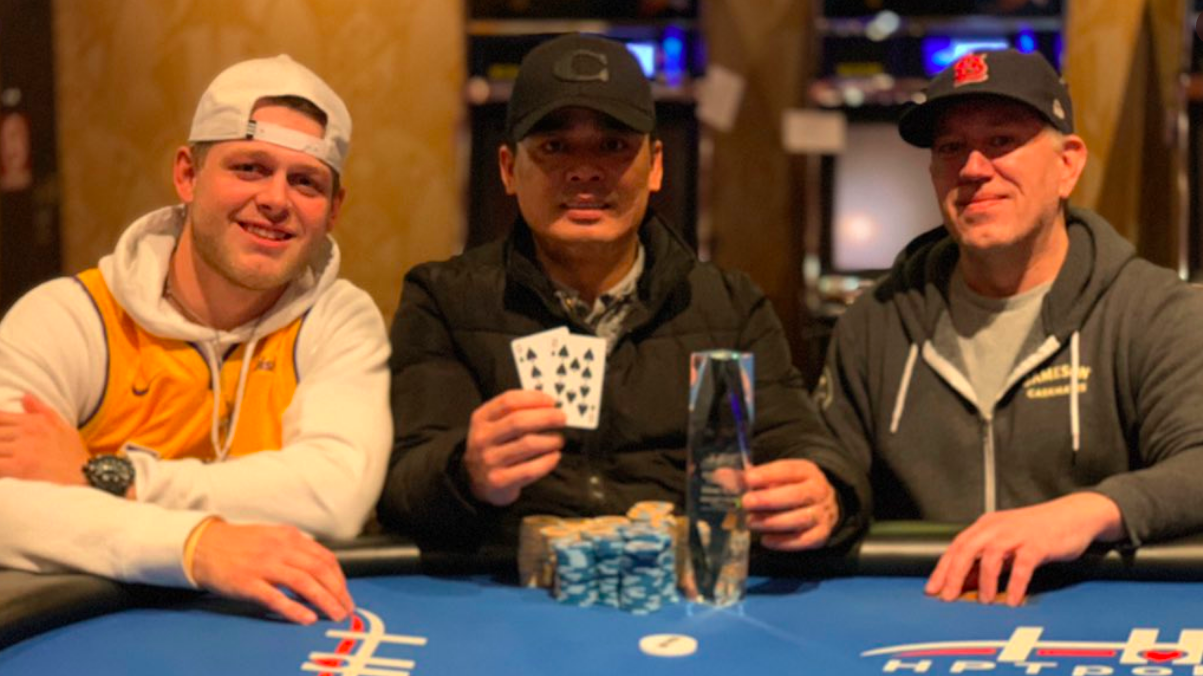 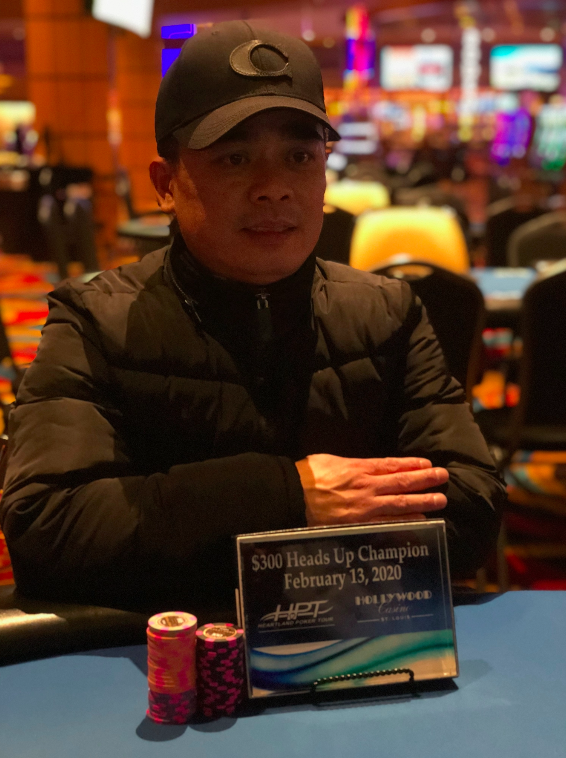 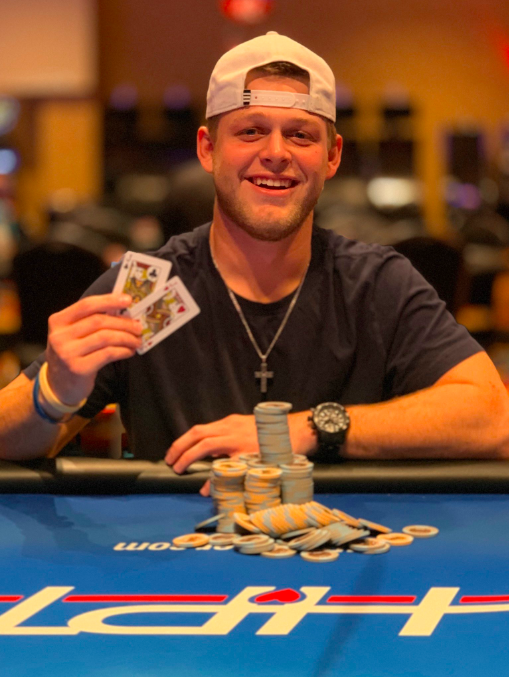 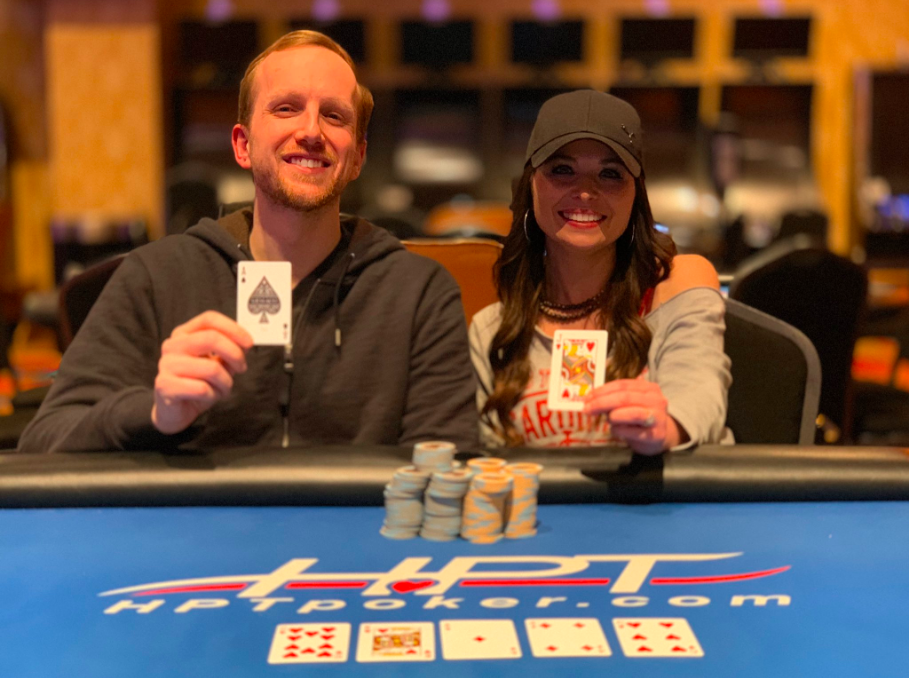 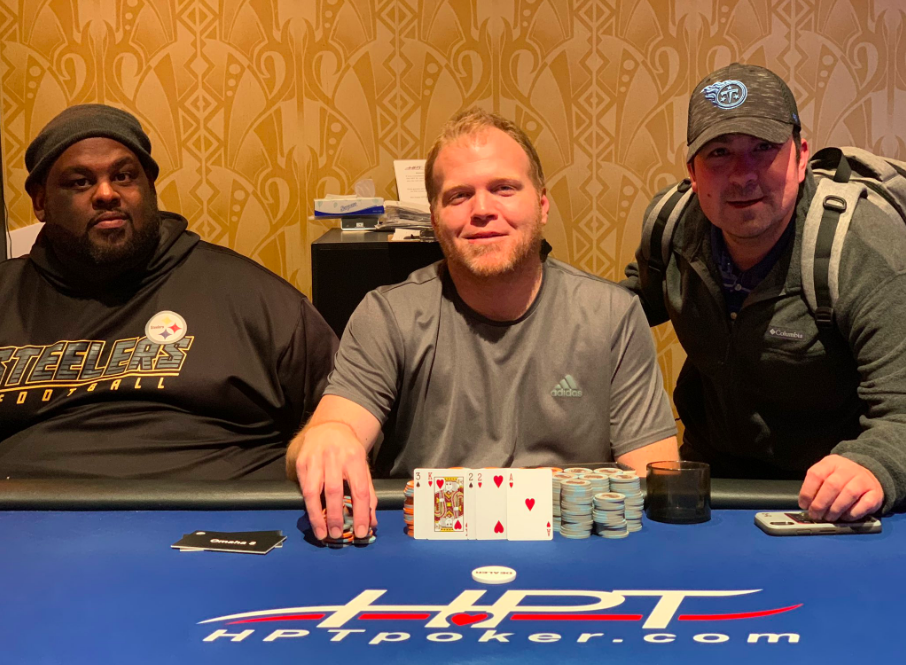 Recap by Brandon Temple of PokerNews

"It's still sinking in..." Kevin Garosshen told HPT Tournament Director Jeremy Smith after taking down the Heartland Poker Tour (HPT) Hollywood St. Louis $1,650 Main Event for $131,184 and a $3,500 Championship Package. Garosshen bested Brent Cunningham in heads-up action after a lengthy final table, and the Las Vegas, Nevada native said about his victory, "I didn't come in with a top stack, and there were a lot of solid players at the final table. I just ran pretty hot, picked my spots pretty well, and it worked out."

Garosshen, who now boasts over $430,000 in career tournament earnings according to Hendon Mob, was able to overcome a tough final table that included a pair of WSOP Bracelet winners in Kyle Cartwright and Brett Apter. "Once Brett got out, he was the best player with four left. Once I won the flip versus him, it was steadily uphill from there. It would've been really tough if Kyle or Brett made heads-up, because they're some of the best."

"Potter", as he was affectionately called by guest commentator Jerod Smith throughout the HPT's Twitch stream, thanked his friends and family after his victory in just his second-ever HPT Main Event, and added, "It still feels kinda crazy!"

Lucas Tae was the first player to exit the final table, finding himself on the wrong end of a flip. Tae's jacks couldn't hold against the Big Slick of chip leader Austin McCormick, who continued his dominating run that started with two tables remaining on Day 2. His fellow St. Charles, Missouri native Neil Patel left next, his ace-five bested by the ace-eight of Kyle Cartwright. Cartwright had a hand in the next bustout as well, as Brian Reeder got his last ten or so big blinds in preflop with pocket sixes. Cartwright was waiting in the big blind with pocket queens, however, and Reeder exited in seventh.

McCormick's hot run finally came to an end in sixth, after a pivotal hand that changed the entire dynamic of the final table. McCormick attempt to run a three-barrel bluff against the start of the day short stack Laura Hoppe, but Hoppe called down with top pair, top kicker, sending her soaring into the chip lead and leaving McCormick as one of the shorter stacks. He managed to find a few ladders up the pay chart, before jamming jack-nine into Cartwright's ace-king preflop. McCormick found no help on the board to end his second HPT St. Louis final table two spots shy of his fourth-place showing last August.

From there, the chip lead bounced back and forth between the quintet for a few hours, with Cartwright, Brent Cunningham and Brett Apter all spending time as the short stack, while Kevin Garosshen and Hoppe stayed near the top of the counts. After the dinner break, Garosshen, Hoppe and Apter all held over 35 big blinds, while Cartwright and Cunningham were down to under fourteen big blinds. The two short stacks found themselves battling soon after play resumed, and Cartwright's ten-nine couldn't overcome Cunningham's ace-eight in a blind versus blind confrontation. Cartwright, who won a WSOP Bracelet in 2014 in a $1,000 No Limit Hold'em event, lost his last crumbs shortly after to finish in fifth-place, leaving him with $28,233 to take home to Tennessee.

The other WSOP Bracelet winner at the table would be the next to exit, as the 2019 WSOP $1,500 Shootout Bracelet winner fell victim to Hoppe. Apter flopped top pair with ace-king, but Hoppe's ace-ten flopped top two, and Apter put all but around half a big blind of his stack in on the river. Hoppe called with the best hand, and although Apter managed to spin his stack back up to around seven big blinds, he fell in a flip to Garosshen to exit in fourth.

Hoppe's magical day would be the next to end, however, as Cunningham spiked a three-outer to take a chunk of chips from Hoppe. A few hands later, Hoppe tried to bluff Garosshen on a coordinated board, but Garossen made the call with second pair to leave Hoppe short. She got her last five big blinds in with ace-eight, but Cunningham was waiting with kings and sent Hoppe, a NASA Engineer, home short of heads-up action.

Heads-up action was a short-lived affair, as Garosshen steadily ground Cunningham down to around fifteen big blinds. Cunningham tried to steal over a Garosshen button open. Garosshen held ace-ten and called, and Cunningham couldn't hit with his ten-deuce to send the Colorado food truck operator home a little over $80,000 richer.

When asked what his plans for the money where, Garosshen beamed and said, "I'm definitely going to fire a lot more events now; maybe fire some more HPT stuff. It's definitely gone well!"

That concludes our coverage of the HPT St. Louis Main Event. The HPT's next stop is a Mini Series in Toledo, Ohio from March 5th through the 15th.

With 20 poker tables (50 tables during HPT), the non-smoking Poker Room at Hollywood St. Louis is the largest in the market. Other features/promos include free wifi, USB ports on the tables, a cashier and self service soda/coffee station, and $15 food vouchers for 4 hours of live play, up to 2 per day. Hungry while playing? Ask your dealer about Buffet To Go! For more information on the poker room, call 314-770-7600 or click HERE.

Click HERE to make your reservation before it's too late! Or call 314-770-8100 and tell the reservationists you're coming in to play HPT.

Exclusive hotel rates for this series will be posted soon. Click HERE to learn more about the on property hotel at Hollywood St. Louis.