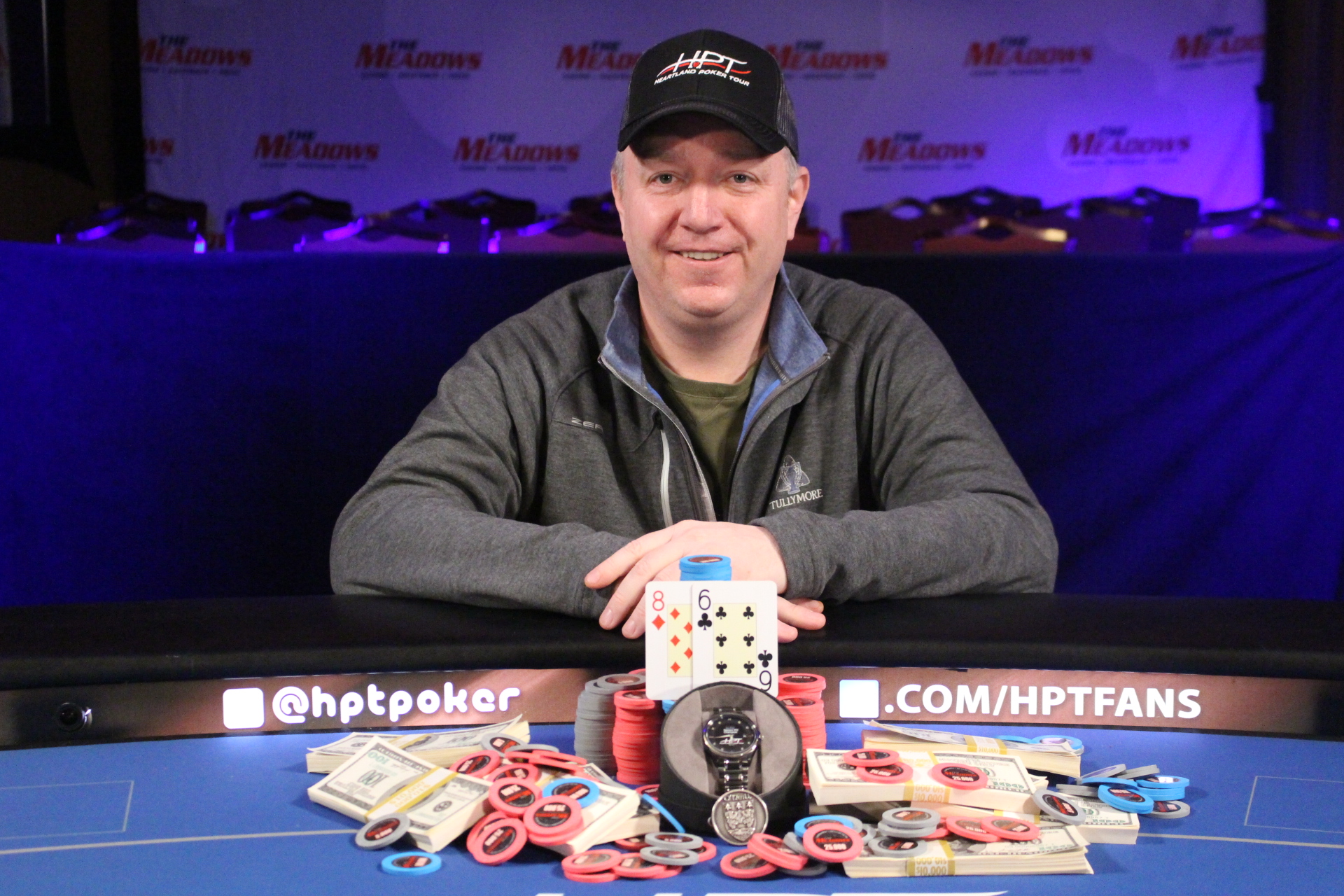 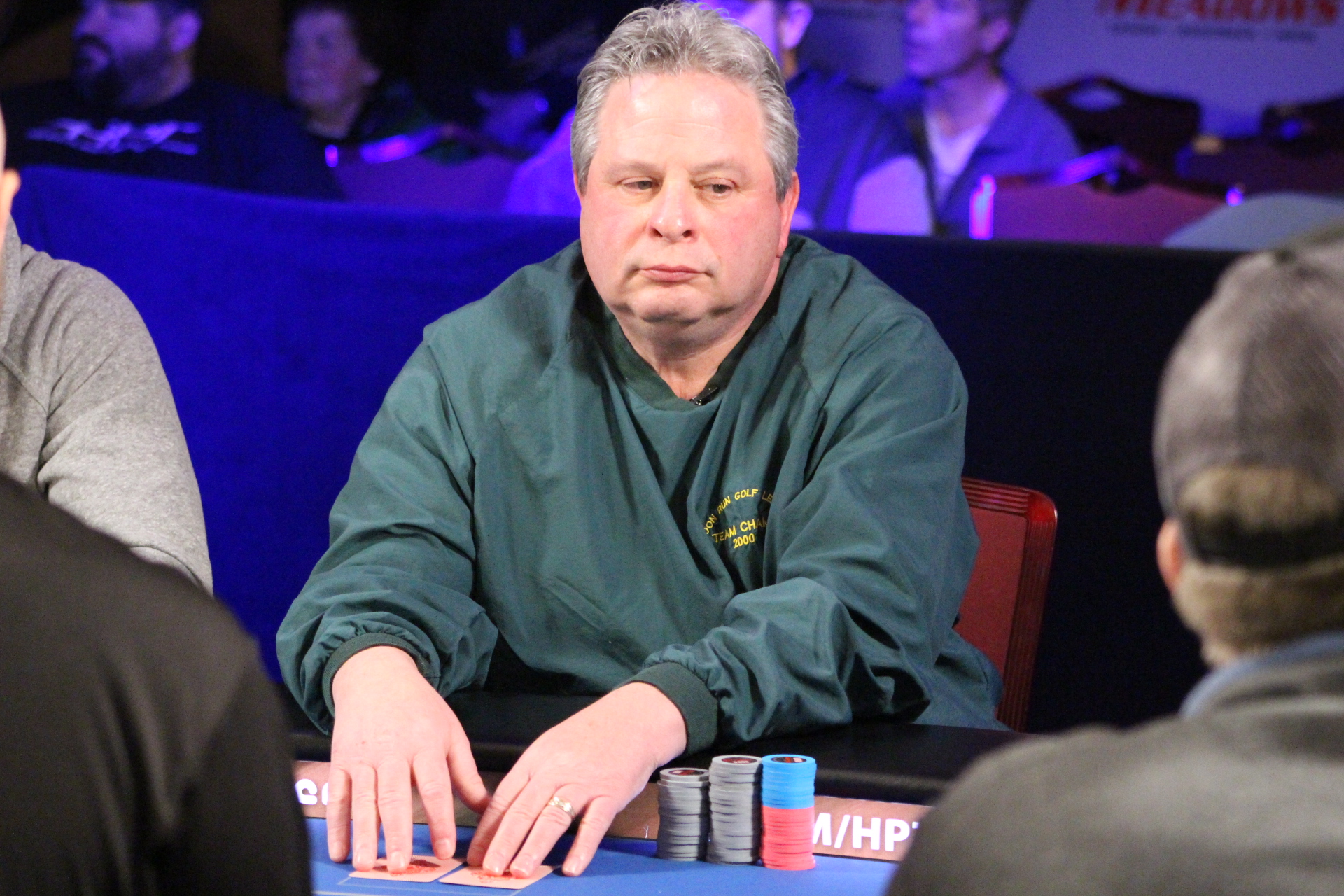 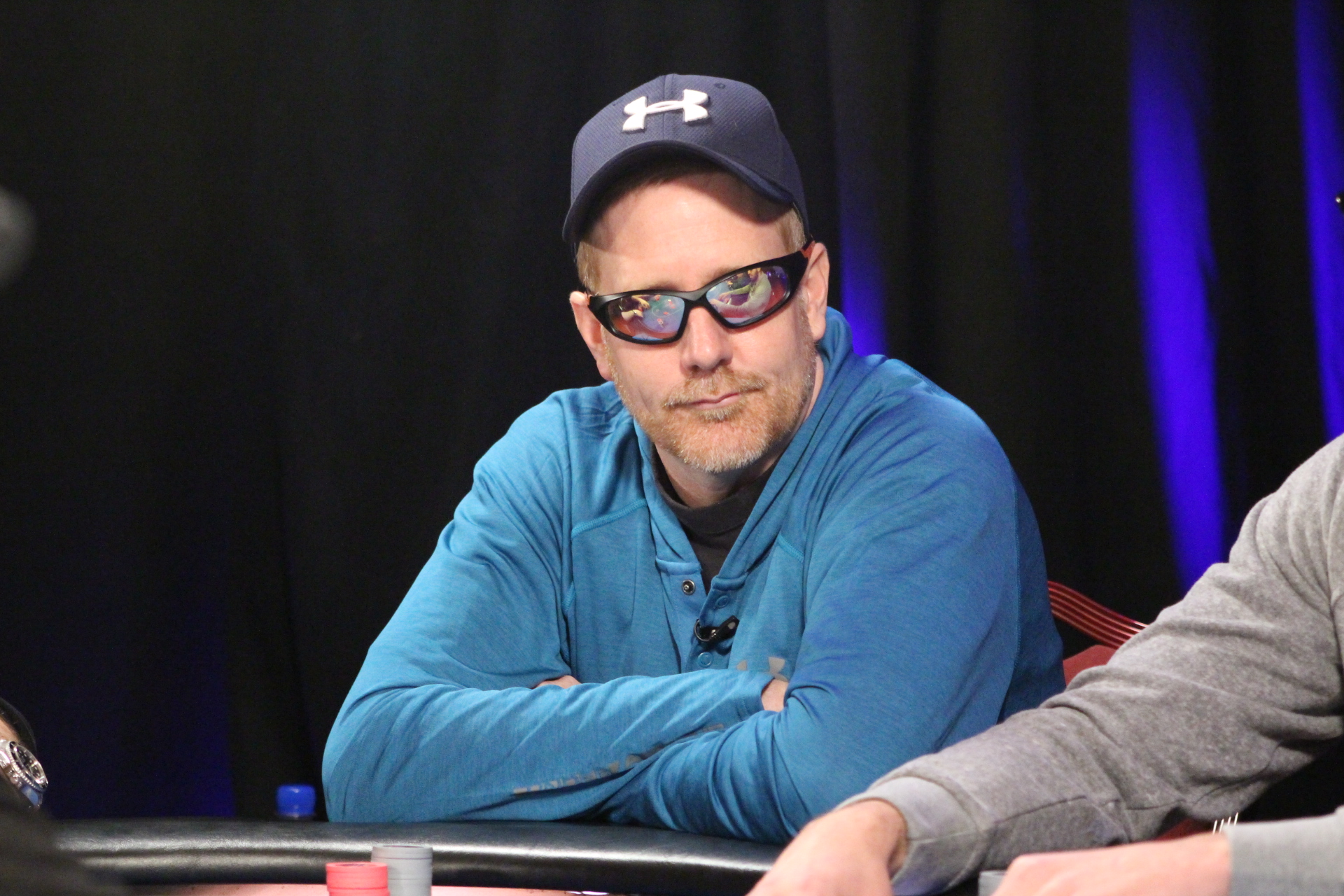 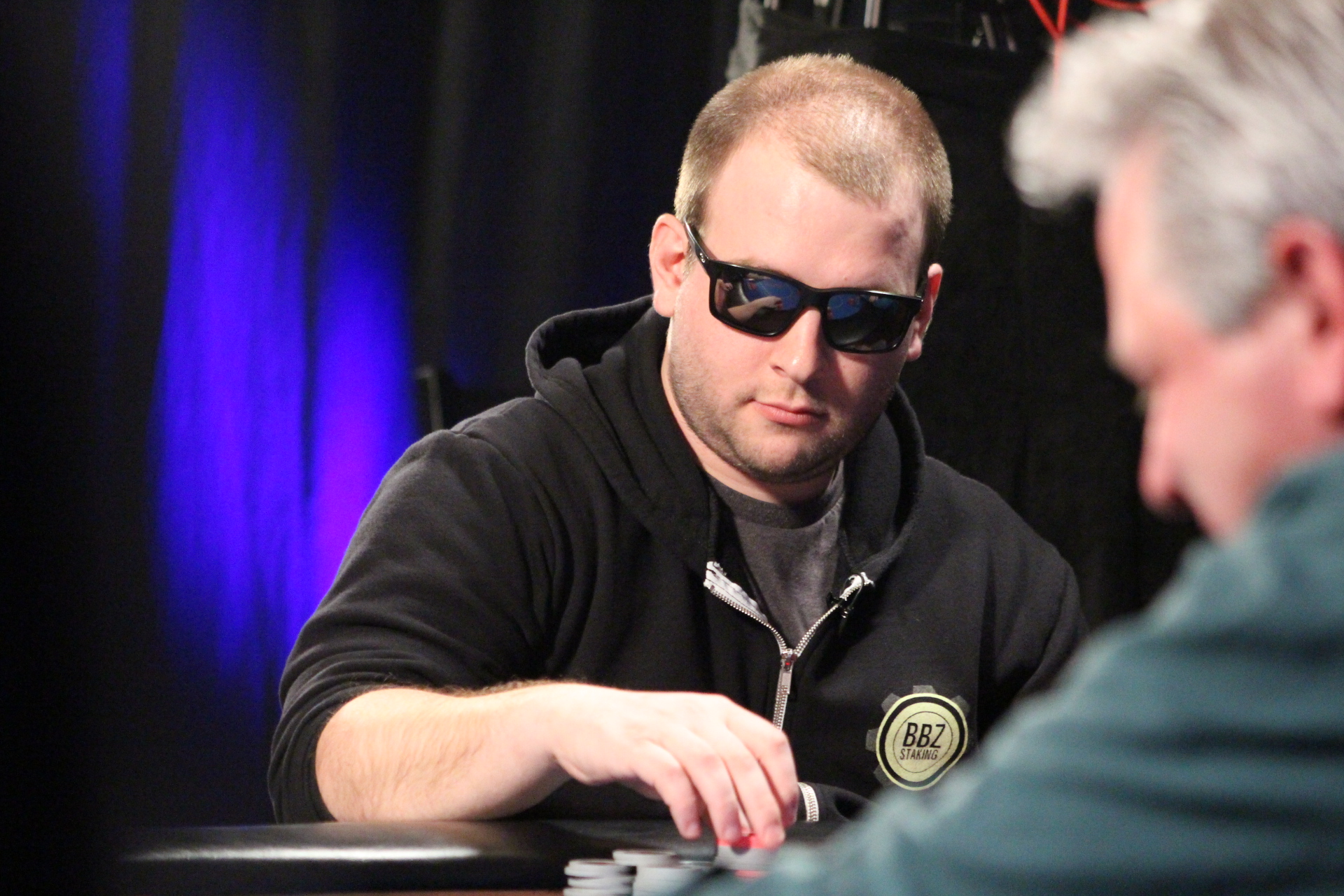 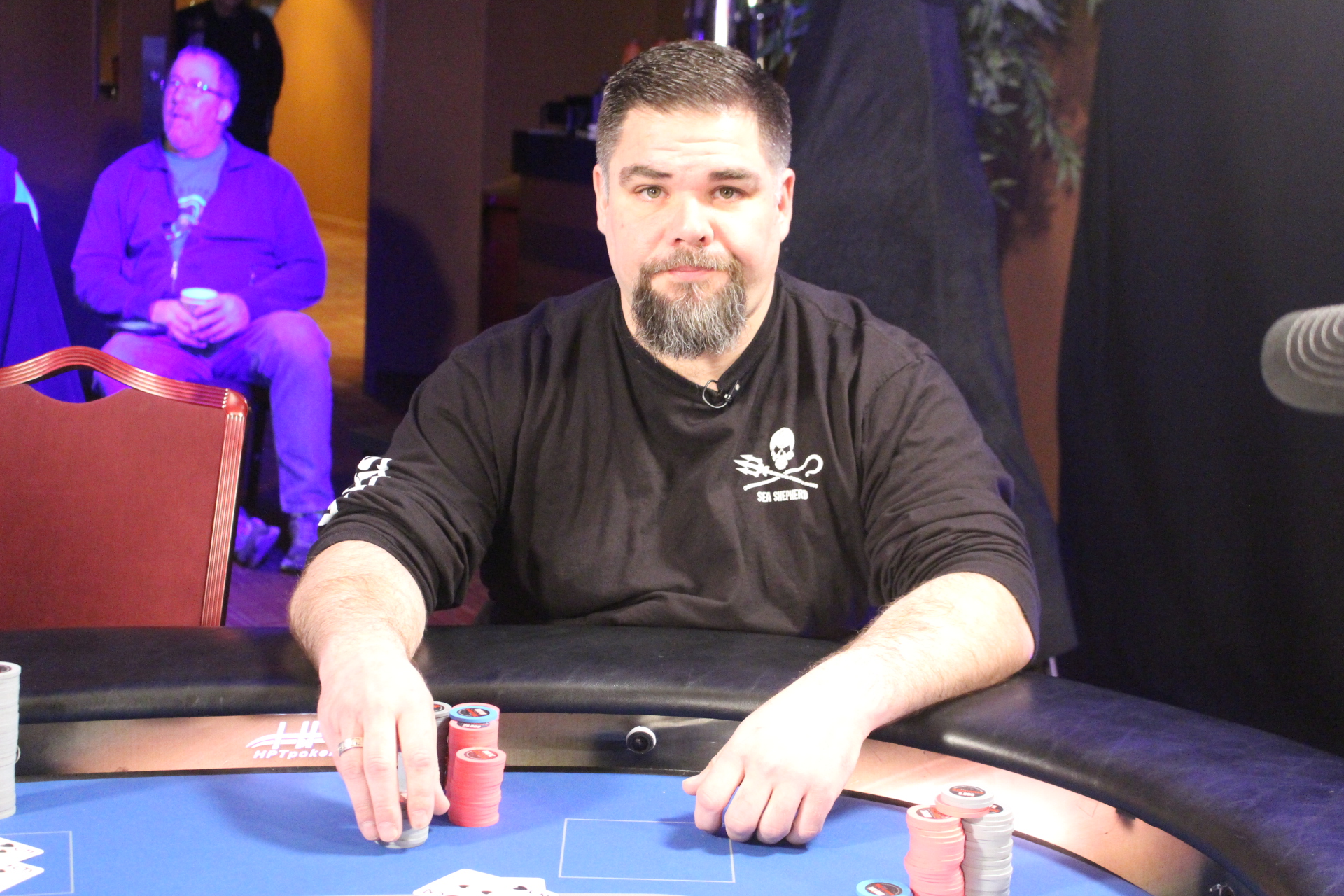 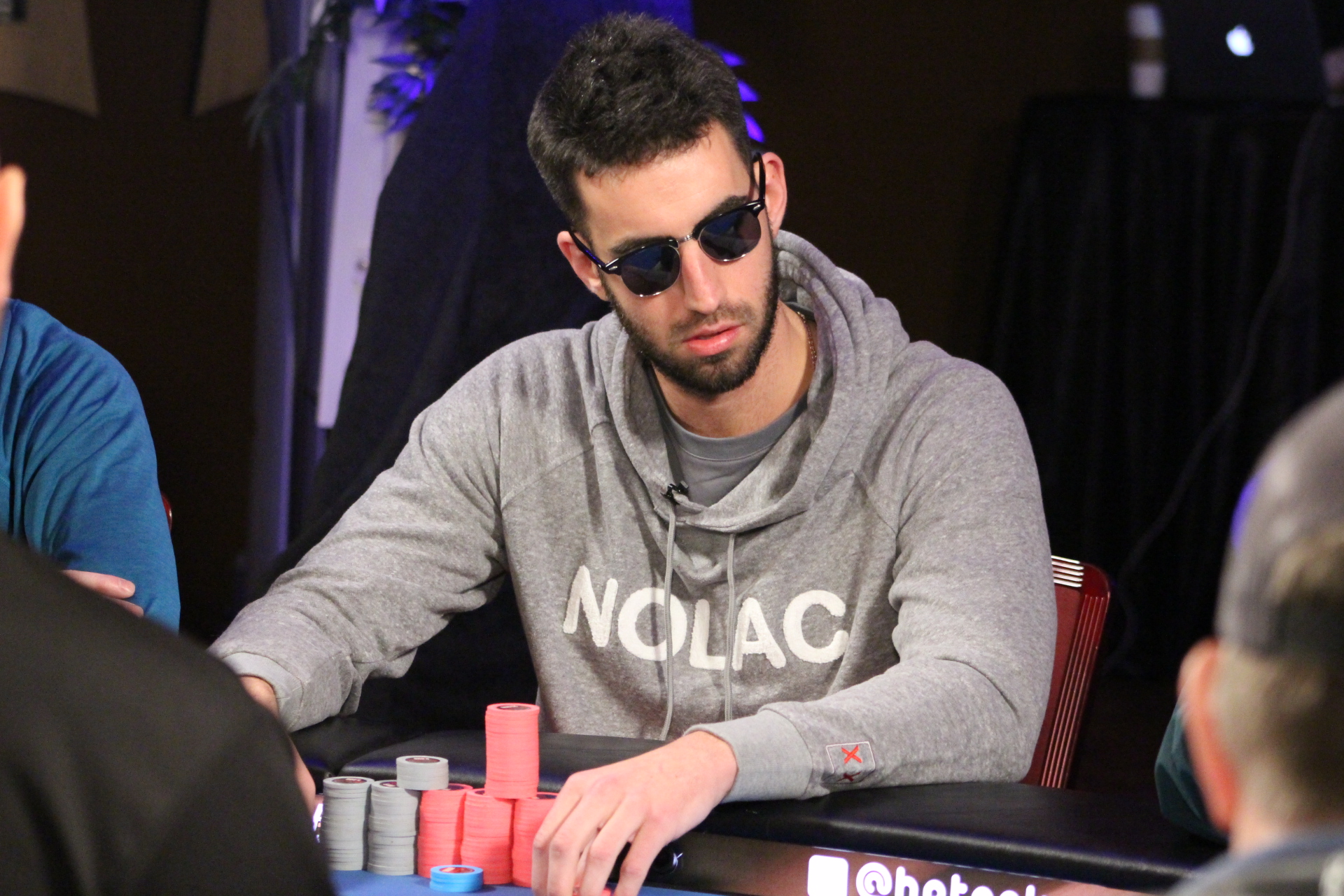 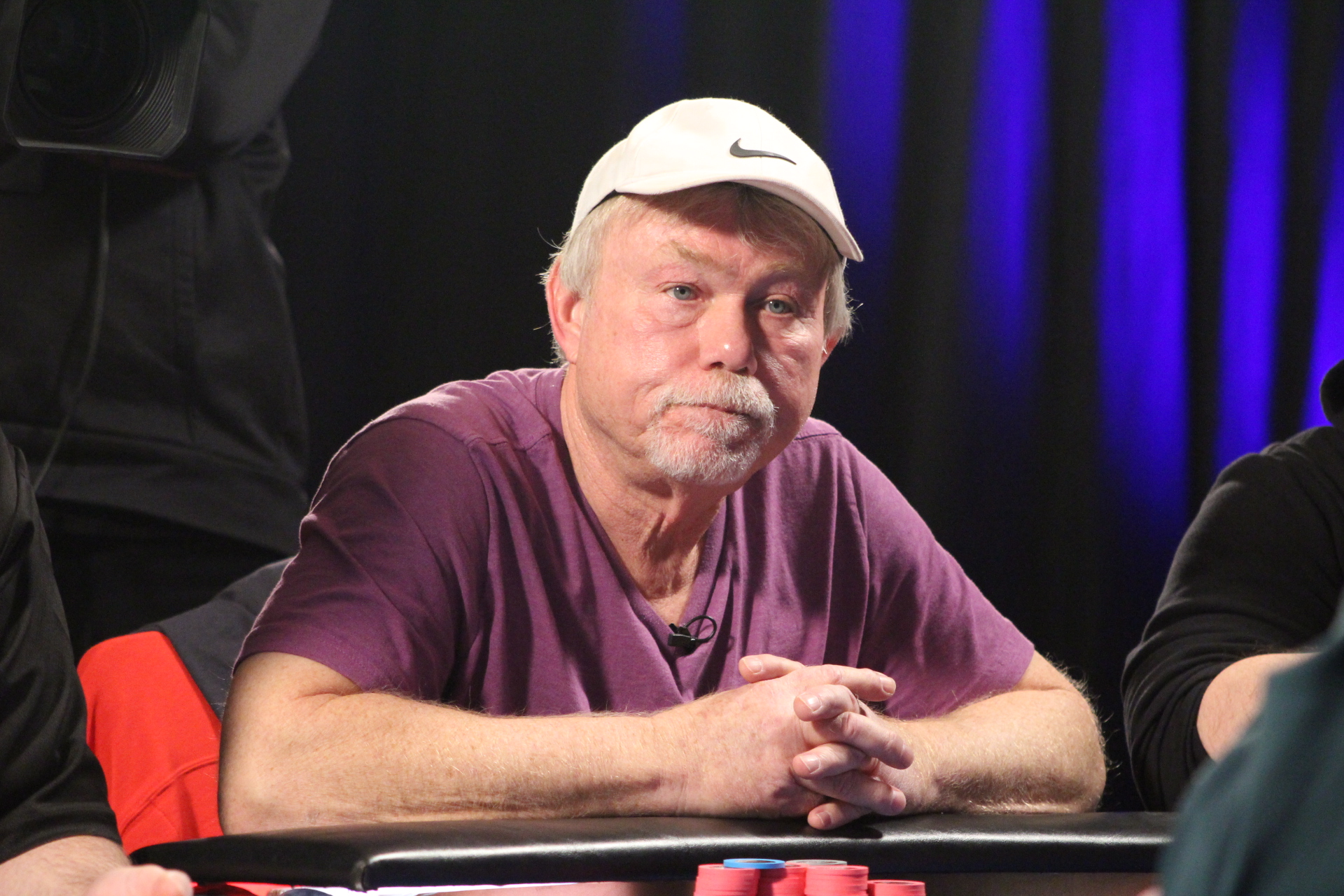 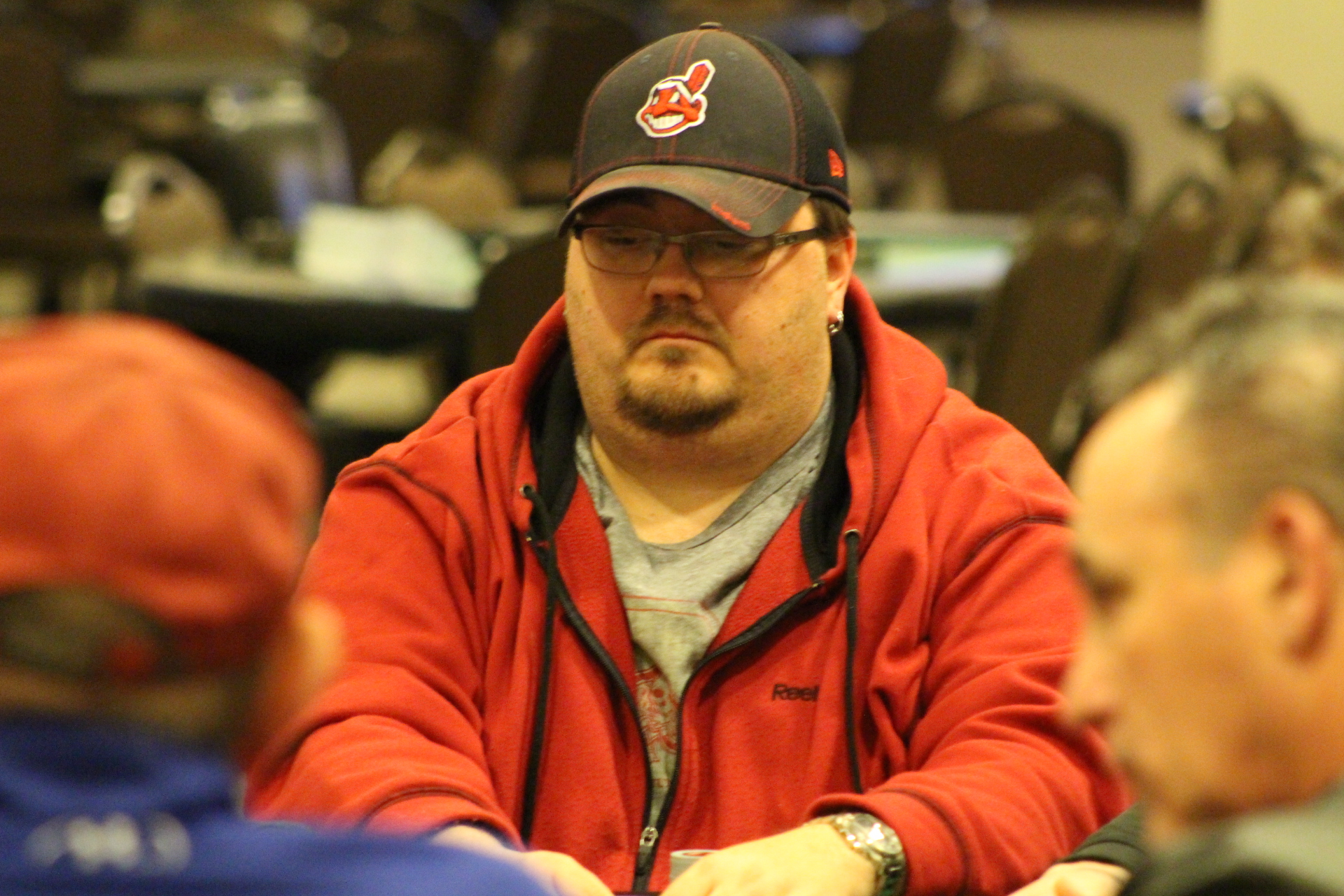 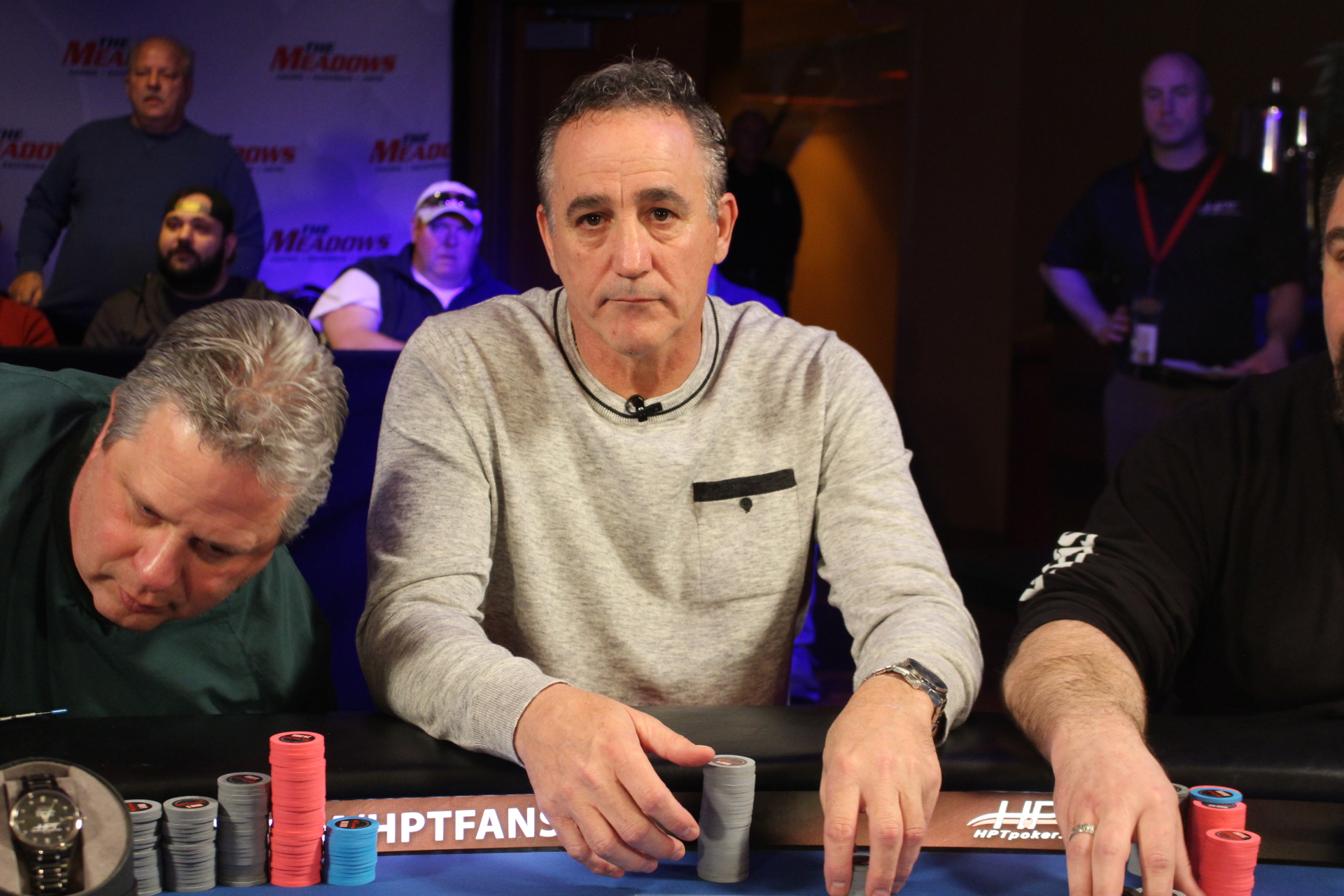 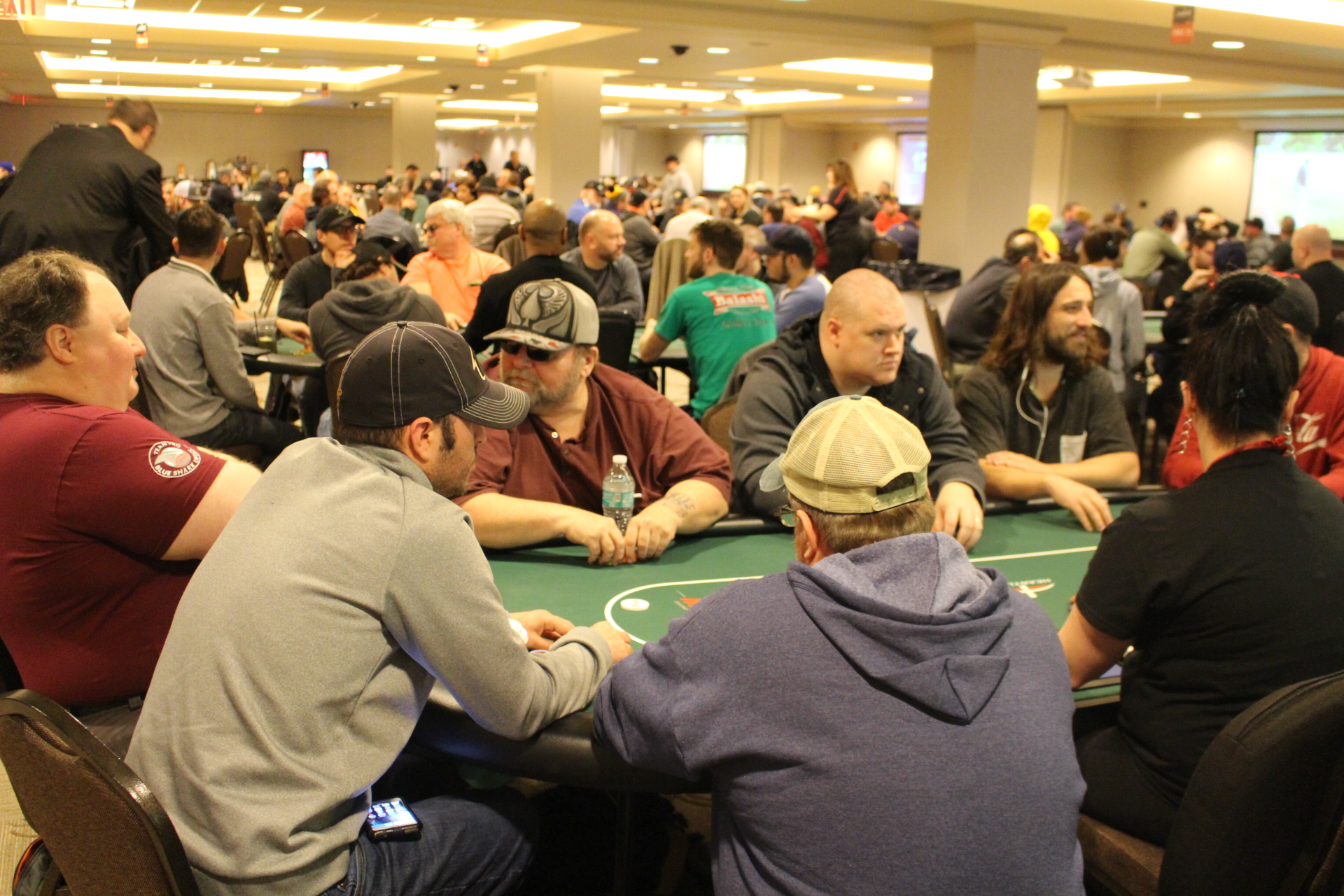 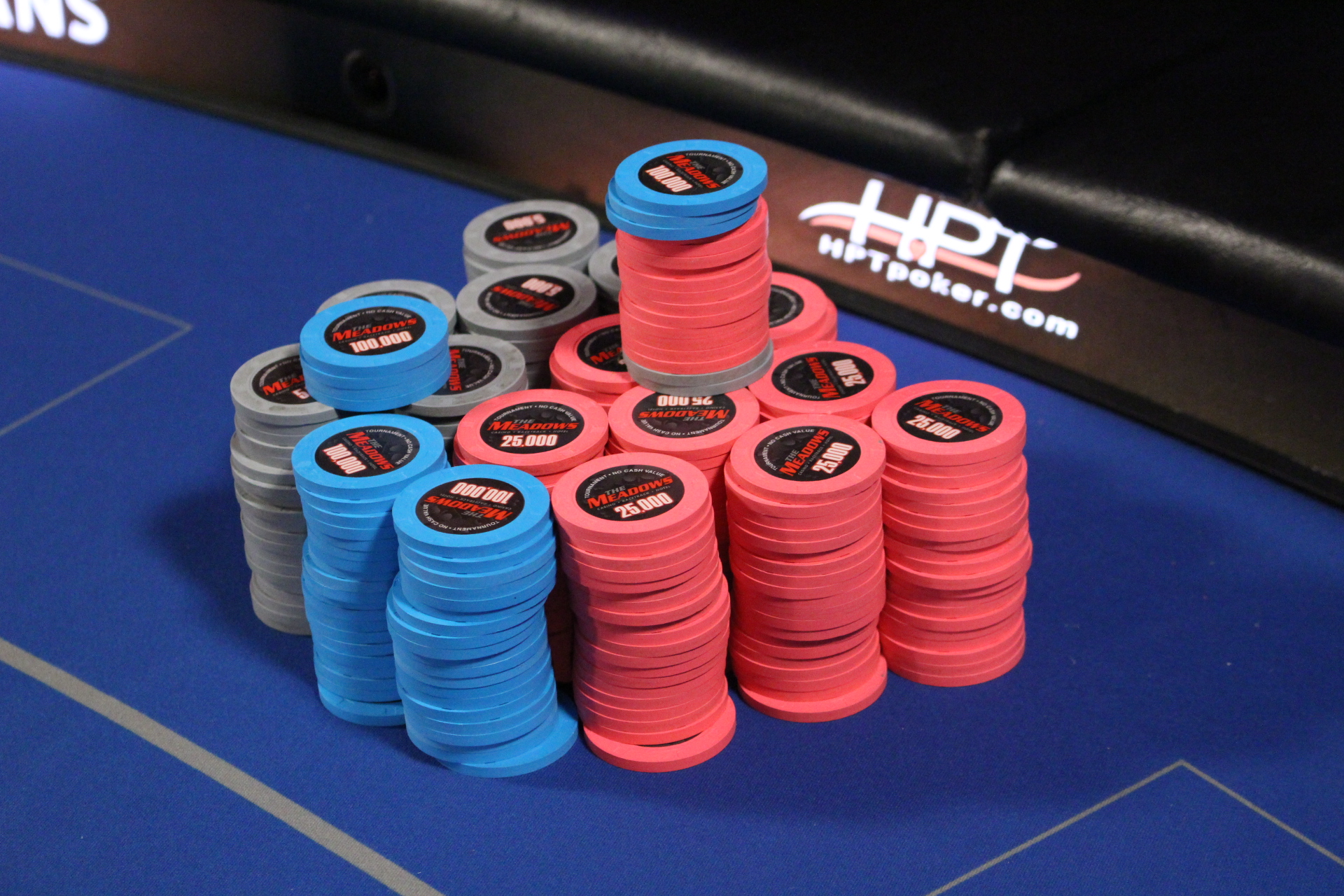 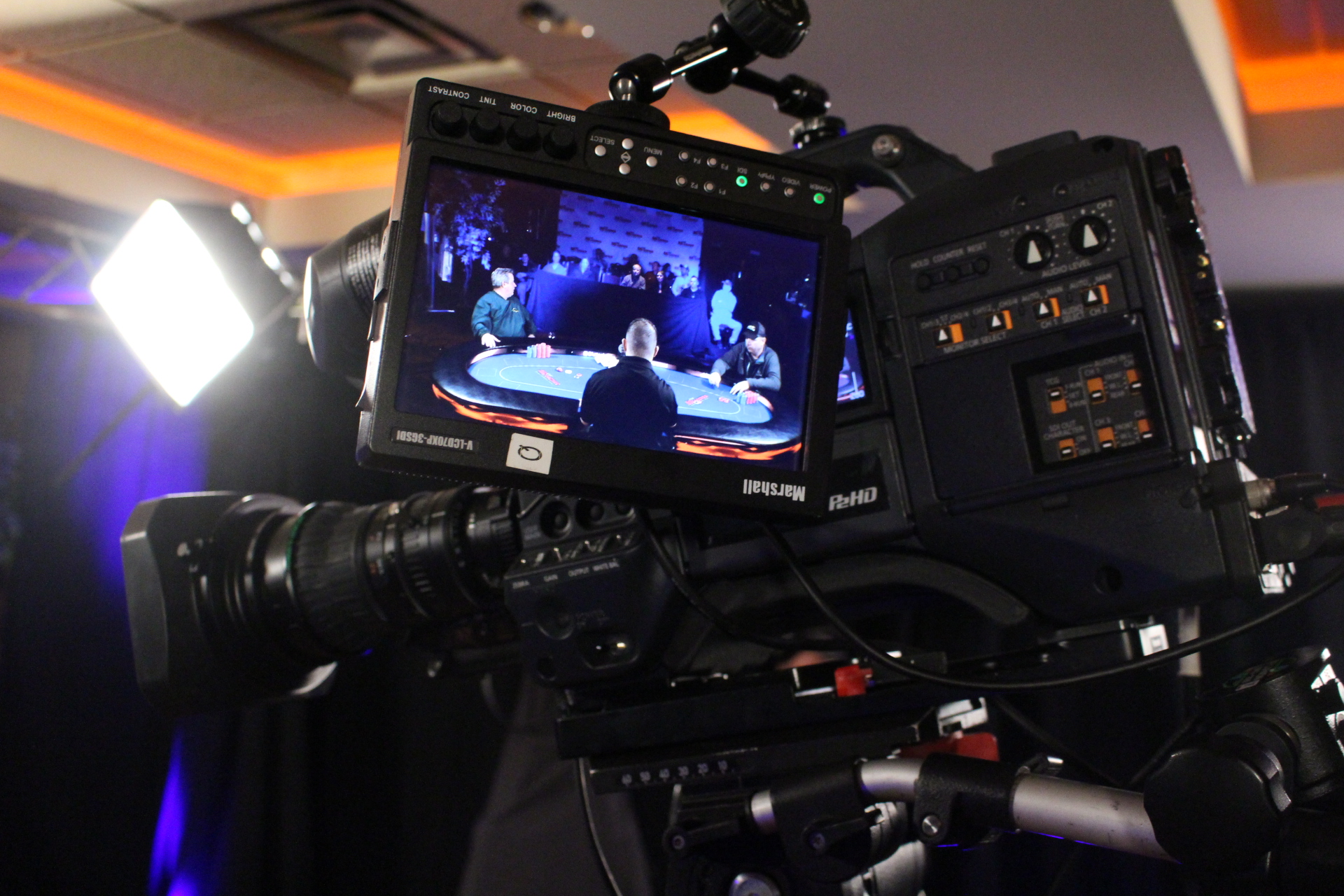 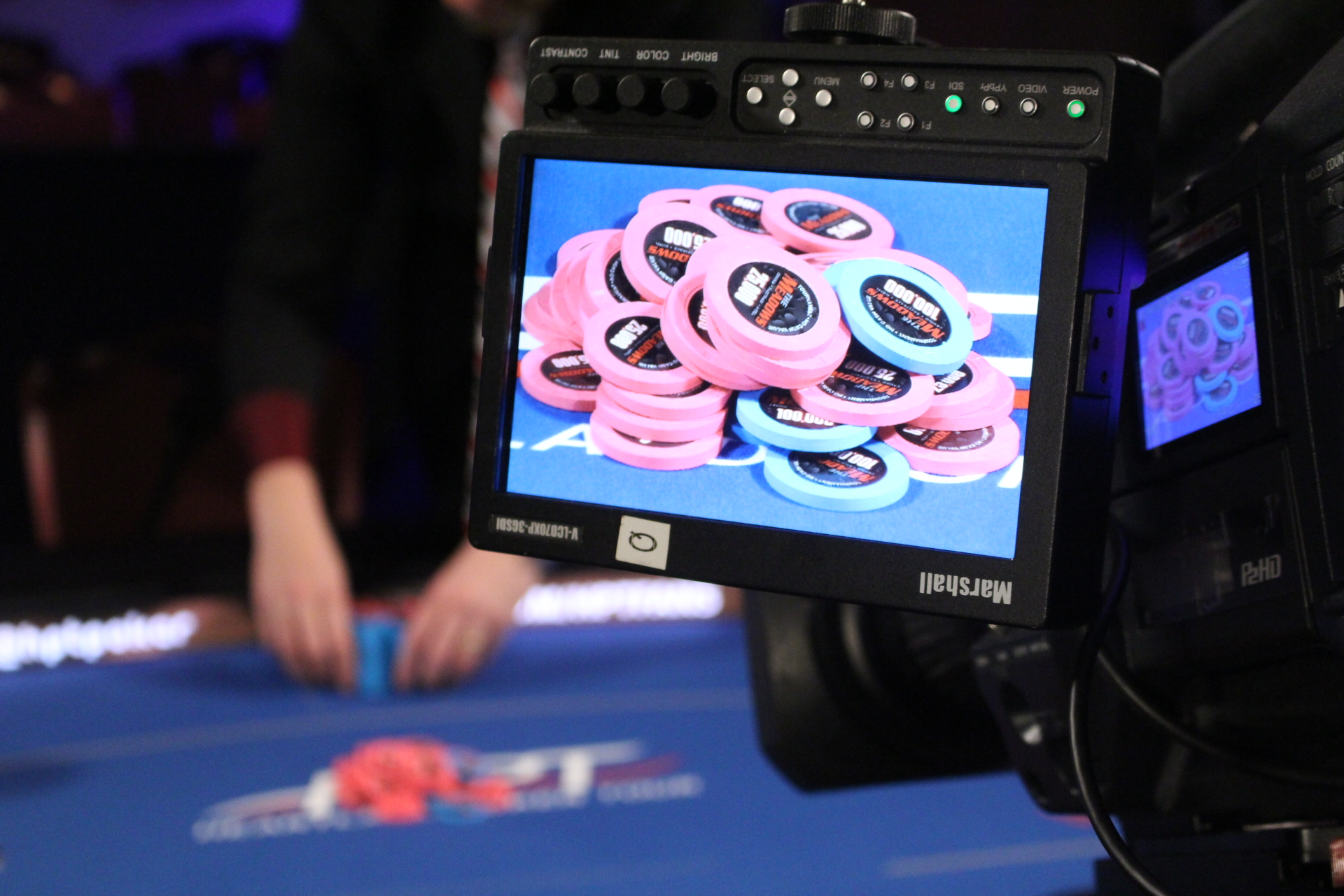 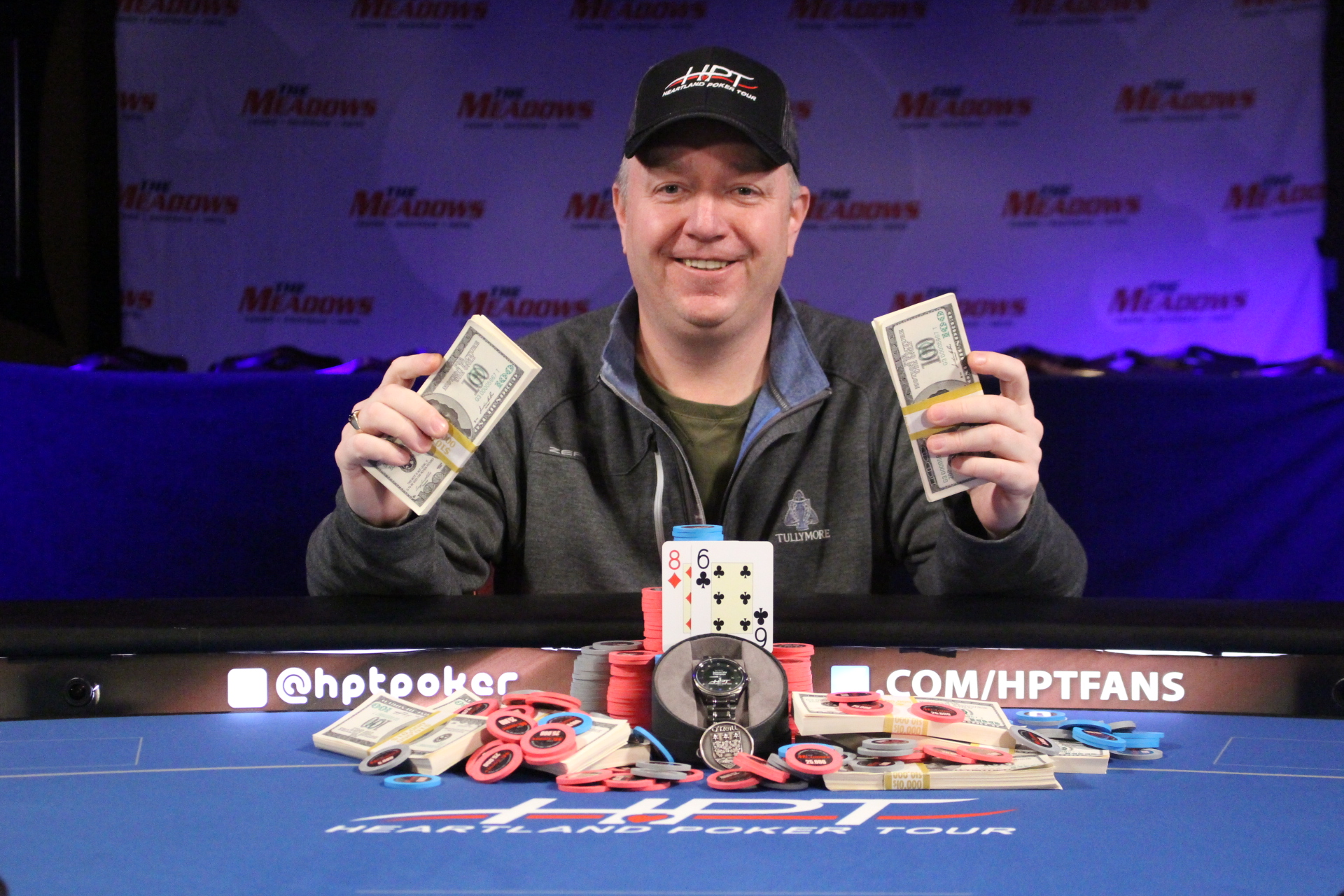 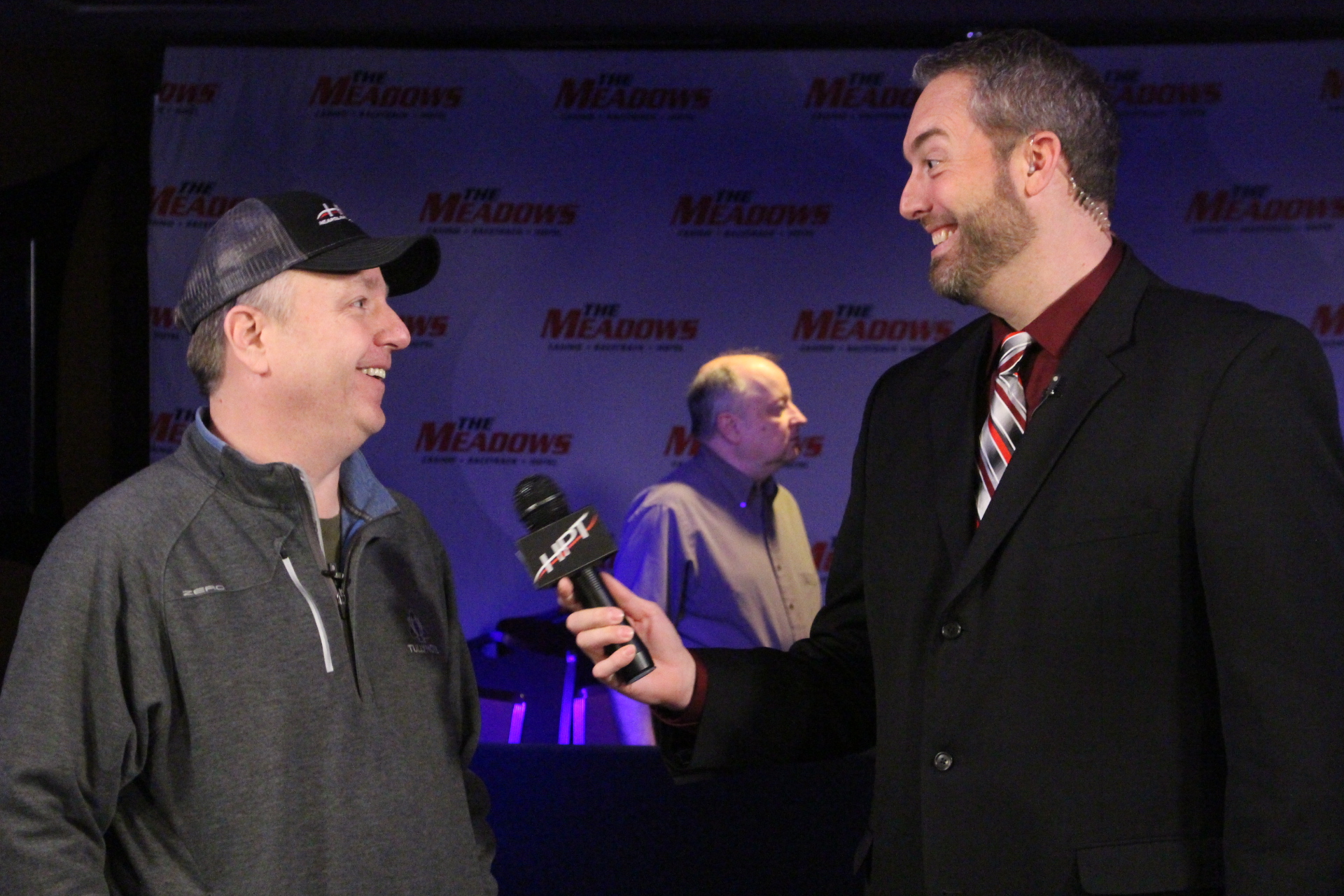 Michael O'Neill gets first big win with HPT at The Meadows

Washington, Pennsylvania (March 26, 2018) – The popular poker tour and television show Heartland Poker Tour (HPT) has wrapped another successful series in the Pittsburgh market. The $1,100 Main Event at Meadows Racetrack and Casino drew a total of 422 entries, building a prize pool of $409,340. In the end it was purchasing manager Michael O’Neill that came out on top with the victory, earning himself $93,340 in the process.

“It was tough. It was a good battle. Hard fought,” said O’Neill as he began to smile. “It’s going to make my 5-hour drive a little easier.”

The Royal Oak, Michigan man started the day as the chip leader and went coast to coast for the win, though at one point he had the smallest stack at the table. O’Neill has racked up nearly $300k in earnings on the felt, including three previous cashes with HPT. This, however, was the biggest accomplishment of his poker career to date.

“I love playing HPT,” the new champ said. “From the structure to the phenomenal staff and all of the players that you get to play with.”

The tournament came down to O’Neill and high school teacher Frank Guerra. On a 10♣ 6♠ 7♥ flop, Guerra made a bold move and pushed his last 3.12 million in chips into the middle with ace-queen, going all-in. O’Neill sniffed out the bluff and made the superb call with his 8♦6♣. The turn brought a king leaving Guerra drawing to an ace, queen, or jack to keep his hopes alive. The 3♦ came on the river and it was all over.

Guerra more than doubled his previous largest poker score with the runner-up finish. He collected $57,629 for the feat. He’ll use the funds to pay off his children’s college tuition expenses.

Somewhat shorthanded in relation to the blinds, David Costain made his last stand by going all-in with K♠6♣. The eventual champ, O’Neill, made the call with his pocket sevens. The board failed to produce a king and Costain, from St. Clairsville, Ohio, was sent to the rail in third place with $38,352 for his weekend’s worth of work.

Pro poker player Nick Immekus has seen much success on the felt over the years, amassing over $800,000 in career earnings on the felt. He padded his resume on Monday by finishing in fourth and cashing for $26,583 in his first HPT event.

Much like Immekus, Kenmore, New York’s Mark Roberts made the most of his first experience playing an HPT event. Roberts won his way into the $1,100 Main Event earlier in the week through a $410 qualifier. He managed to parlay that investment into a fifth-place finish, good for $20,089. Roberts says he plans to put the winnings to use by entering more poker tournaments.

Local poker player Keith Morrow has been on a bit of a heater since the year began. The Pittsburgh man has already logged two victories this year and was looking for his third on Monday. Alas, it wasn’t meant to be as Morrow’s K♣J♠ failed to outdraw Guerra’s A♦9♣. Morrow earned $15,625 for sixth place.

Dave Serkoch, a self-employed contractor, kept the mood light-hearted early in the day with his humorous table talk. Unfortunately for Serkoch, his time at the table was short-lived. The McKees Rock native was knocked out early by Immekus. Serkoch’s seventh-place finish garnered him $12,987 which he plans to use to purchase gifts for his family.

Cleveland’s Chris Licht had a great run over the weekend to earn a spot at the final table. Due to personal matters, Licht was unable to participate on Monday and was blinded out. A chef by trade, Licht finished in eighth place with $10,755.

Dean Schultz didn’t have much to work with when the day began. The Stow, Ohio man got his last three big blinds in on the second hand of the day and was sent to the exit by Roberts. Schultz, a real estate investor, earned $9,091 for ninth place.

From here, HPT heads west for a 10-day series in Las Vegas. That event kicks off Thursday and all the details can be found at HPTpoker.com.

With 10 dining options, there's something for everyone at Meadows Casino. From classic burgers and hot dogs at Frank's American Grill to USDA Prime selections at the award-winning Bistecca Steakhouse, you're sure to find something to satisfy your cravings.

Exclusive hotel rates for this stop are coming soon!

Book at the nearby DoubleTree by Hilton Pittsburgh for rates as low as $87.69 per night!